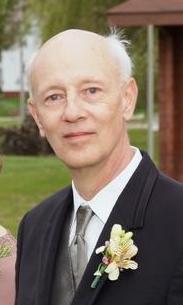 William “Roddy” Eubank Jr., age 66 of River Falls, died on Wednesday, July 31, 2013 from injuries sustained in an automobile accident.  Bill was born the son of William Eubank Sr. and Claire (Berkle) Eubank on February 12, 1947 in Takoma Park, Maryland.  From Maryland, Bill’s family moved to California and then to his farm in St. Croix County, Wisconsin.  Bill was a graduate of River Falls, High School, class of 1965, and he attended both UW River Falls and UW Madison before enlisting in the Army.  He served for four years and was stationed in Germany.  After his service Bill finished his education at the University of Minnesota, where he received his Bachelor’s and Master’s degrees in analytical chemistry.  While at the University of Minnesota, Bill fell in love with computers.  His first job took him to Lewistown, West Virginia, where he worked as an embedded systems programmer.  Bill moved to Boston where he met his future wife, Rebecca Munroe.  They were married on April 19, 1980 in New Bedford, Massachusetts.  In 1981 Bill moved back to the family farm where he grew up.  He worked for Onan Company in Fridley, MN from 1986 until 2001.  Most recently, Bill was employed at Dynatronix in Amery, Wisconsin.  He truly enjoyed his work and those he worked with, and he made many lasting relationships there.  Bill was an avid orchardist, and a newly discovered variety of cherry tree, Prunis Eubank, was named for him.  He was an amateur beekeeper.  Bill was part of the Three Rivers Wine Club with some of his closest friends.  He was also a part of the Minnesota Landscaping Association.  Bill loved to be outdoors, taking walks with his dogs every evening.  He enjoyed fishing, and he always carried his gear in case the opportunity presented itself.  He liked to camp, canoe, and kayak.  Bill was very generous and good-natured, and he was helpful and open to everyone he met.  He could fix anything.  He is preceded in death by his parents, his sister Martha Eubank, his aunt Mary Norvell, and his cousin Davey Sipple.  He is survived by his wife Rebecca Eubank, his daughters Jennifer (Dan) Chapman and Elizabeth Eubank, his granddaughter Katherine Chapman, his cousins Claire Sipple, Barry Sipple, Steve Eubank, Leanne Sipple, and Harvey Eubank, and many other relatives, neighbors, and friends.  A memorial service will be held in September on the family farm.  Arrangements are made with Bakken-Young Funeral & Cremation Services of River Falls.