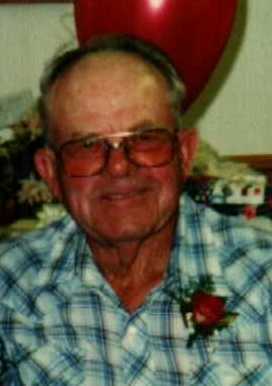 Willard “Mike” Ritchey age 85 of Maiden Rock died Thursday, February 20, 2014 at St. Mary’s Hospital in Rochester, MN.  He was born the son of Christopher and Mary (Bledsoe) Walden Ritchey on January 23, 1929 in St. Joseph, Missouri.  He grew up in Missouri.  Mike began his career in Road Construction which brought him to Wisconsin where he met Colleen Field.  They were married on July 20, 1956 at the Little Brown Church in Nashua, Iowa.  They settled in the Maiden Rock area.  Mike continued his career in road construction, working with various companies.  He was a proud member of the International Union of Operating Engineers Local 150.  He enjoyed hunting, fishing, snowmobiling, and cutting wood.  There were many family camping trips and every year on Memorial Day, Fourth of July, and Labor Day, people came to “Ritchey’s Ranch” to camp and cookout for the holiday.  Mike was kind and generous.  He was always willing to help others, and took his role as provider for his family very seriously.  He is preceded in death by his parents; loving wife, Colleen Ritchey; son, Walter Ritchey; brother, Robert Ritchey; sister, Sylvia Ready; and half-sisters, Effia Winneke and Myrtle Burge.  Mike is survived by his children, Betty (Kevin) Herzberg, Robert (Judy) Ritchey, Patsy (Larry) Vegter, Rose Mary Ritchey, Beverly Ritchey, and Pauline (Allen) Gullickson; 12 grandchildren; 20 great-grandchildren; 4 great great-grandchildren; and many nieces, nephews, relatives and friends.  A Funeral Service was held on Saturday, March 1, 2014 at 11 am at the Maiden Rock United Methodist Church.  Visitation was Friday, February 28, 2014 from 5-8 pm at the Bakken-Young Funeral Home in Maiden Rock and on Saturday from 10-11 am at the church.  Spring interment will be in the Maiden Rock Cemetery.  Arrangements are with Bakken-Young Funeral & Cremation Services of Maiden Rock.