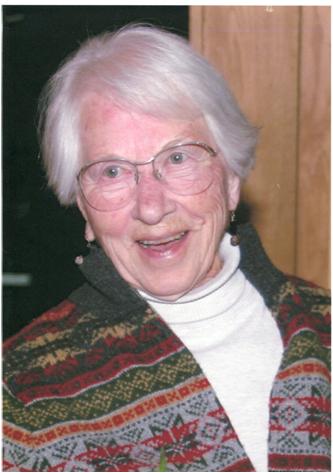 December 18, 2014
Virginia Rodli, 101, died Thursday, Dec. 18 at Comforts of Home in River Falls, WI.  Virginia was born on May 21, 1913 in Lakota (formerly Germania), Iowa, the first of five children of Gustave and Gertrude Thaves.  She grew up in Lakota and Burt, Iowa, where her father was the editor of the local weekly papers, and later moved to Albert Lea, Minnesota.  It was there that she met the love of her life, David Rodli.   Albert Lea was their home for the first years of their marriage, including a period in which David served in the South Pacific during World War II.  As happened with many families during those war years, all four of her brothers also served in the military during WW II.  In 1947, Virginia, David and their young children moved to Baldwin, WI, where David became employed by St. Croix Electric Cooperative.  After David died in 1965, Virginia began to work as a ward secretary at the Baldwin Hospital.  She remained in Baldwin until 1976, when she moved to River Falls.  Virginia possessed a love of life, a love that included music, art, birding, gardening, reading, travel, writing, current affairs, furniture refurbishing, singing, piano-playing, painting, poetry, politics and people.  She enjoyed a number of years as a singer with Music Madams, and was also active in the Methodist Church, AAUW, Tuesday Club, Meals on Wheels, SOS, several book clubs, and a poetry group.  Virginia was the epicenter of her family.  She once said that her whole purpose in life was to be a good mother, a task at which she truly succeeded and one which extended to her grandchildren and great-grandchildren.  She became ill just a few days before her death and when that illness set in and she began to fade, she was heard to say  “There I was, having fun and then all of a sudden I wasn’t having fun.”  Virginia is survived by daughters, Sue (David) Astin, of Golden Valley, MN and Jan Yee, of Marengo, Ill, son Keith (Katharine Grant) Rodli, of River Falls, six grandchildren (Scott, John, David, Nora, Karl and Kristine), six great-grandchildren (Elizabeth, Griffin, Payton, Eleanora, Una Mae, and Kailu), sister-in-law, Liz Thaves, of Jordan, MN, seven nieces and nephews, including special niece Sara Thaves, of Seattle, and her first daughter-in-law, Maralee Savage, of River Falls.  She was predeceased by her parents, her husband David, her son-in-law Sam Yee, and her four brothers, Denton, Keith, Stuart and Bob.  A Celebration of Virginia Rodli’s life was held on Saturday, May 30, 2015 at 11 am at the River Falls United Methodist Church 127 S 2nd Street River Falls.  Memorial visitation was also Saturday from 9:30-11 am.  Interment was in the Baldwin Cemetery.  In lieu of flowers, memorials honoring her can be directed to the David and Virginia Rodli Scholarship Fund, UW-River Falls Foundation, 410 S. 3rd St., River Falls, WI 54022.  Arrangements are with Bakken-Young Funeral & Cremation Services of River Falls.
About bakkenadmin