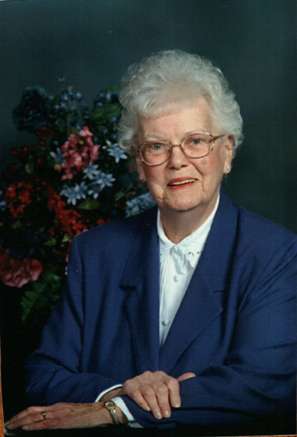 Viola Anna (Russell) Gomer,  a resident of the Baldwin Care Center since January of 2013, went home to be with her family,  on Sunday, November 24, 2013.  Viola was born August 13, 1921, the first twin daughter, to Frank and Mary (Volesky) Russell in River Falls, Wisconsin.

Viola was a professional woman working in the Twin Cities and later in St. Louis, MO and Indianapolis, IN where she worked for many years in accounting/payroll at Amex Coal Company.   While living in Indianapolis Viola looked forward to the Indianapolis 500 race where she volunteered where ever she was needed. Viola worked for Amex Coal Company for 24 years, 1 month and 1 day and retired around 1989 when returned to Wisconsin to be near her family and take care of her 93 year old mother.

Viola volunteered for many organizations and was a member of St. Mary’s Immaculate Conception  Catholic Church where she quilted with the guild there; she was a member of the American Legion Women’s Auxiliary in Baldwin,  Son’s of Norway and the Senior Citizen’s Center where she was secretary for many years.

Viola will  be missed by her nieces and nephews, Jerry (Karen) Moller of St. Paul, MN; Roxann (Gary) Peterson of Spring Valley, WI; Sandy (Roger) Somsen of Baldwin, WI;  Sherry (Richard) Diess of Hammond, WI and Francis (Linda) Conrad of Hammond, WI.   Also  survived by a brother-in-law George Conrad of Baldwin, WI  and sister-in-law Myrna Russell of Florida.  She is also survived by many great nieces, nephews and many friends.

Viola is preceded in death by her parents, Frank and Mary Russell; brothers Virgil, Leroy, and Francis and sisters, Violet and Marjorie.