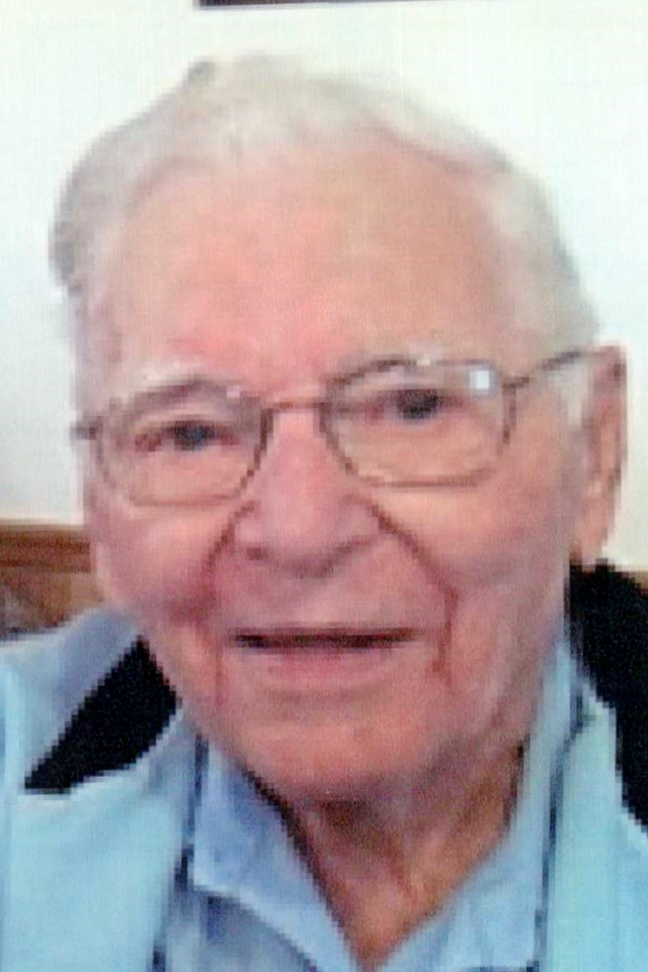 Vern Ralph Nelson died peacefully on May 9, 2014, after a long and productive life.  He was 96 years old, the oldest of six children born to Marie (Peper) and Arnold Nelson in the Town of Star Prairie on Oct. 11, 1917.  Vern’s life was characterized by a deep sense of responsibility to family and community, hard work, and the ability to respond with resilience to life’s challenges.  These characteristics—along with a keen mind and dry sense of humor—served him well. Vern’s work as a dairy farmer began as a ten year old, regularly milking cows and doing other chores on the family farm.  At the age of 18, in the midst of the Great Depression and a severe drought, he hopped freight trains to Pullman, Washington, where he found a job on a farm.  After the death of his father in 1938, Vern returned to Wisconsin and assumed major responsibility for the family farm. He married Doris Measner in 1942 and began farming on his own in 1946, with a herd of 16 Holsteins on 80 acres of neighboring land.  Over the years, the Nelson family grew to include six children.  In l963 the couple bought an adjoining 200 acre farm, where Vern and his son Greg then ran a successful dairy operation together.  In 1981, Vern and Doris moved to a 17 acre farm near Huntington, and he stayed active well in his 80’s—milking cows and driving tractor for planting, harvesting, and snow removal.  Vern and Doris moved to New Richmond in 2005 and into The Deerfield in 2009.  Vern leaves a long legacy of community service, including many years on the board of Squaw Lake School District #4.  He also served for over 20 years on each of the following: Star Prairie Town Board (including serving as Town Chairman), St. Croix County Board (including chairing the St. Croix County Health Center committee), and the St. Croix County Fair Board.  One of his proudest accomplishments was helping to start the draft horse show at the St. Croix County Fair.  Vern loved and drove draft horses from the time he was a boy; he was a familiar figure at area horse pulls and counted others who love draft horses among his best friends. In addition to farming, Vern was employed with St. Croix County ASCS, Farmington Mutual Insurance, and Berg farm equipment.  Vern was also a helpful neighbor, staunch Democrat, St. Louis Cardinals fan, shrewd pinochle player, tree planter, bird lover, fisherman, and walking textbook of local history.  His remarkable memory of past events, family histories, and local news was legendary and will be missed by all who knew him. Vern was a lifelong member of Zion Lutheran Church, East Farmington, WI.  He was preceded in death by his parents; his wife of 70 years, Doris, and their son Stuart; two sisters Pearl Lumsden and Leona Meehl; a brother Warren; son-in-law John Bierbrauer and great-grandson Max Trudell.  He is survived by five children, Bonnie Trudell of Madison; Greg Nelson of New Richmond; Bev Bierbrauer of Ellsworth; Wendy Nelson of Toronto, Ontario; Scott Nelson of New Richmond, and daughters-in-law Sandy Nelson of New Richmond and Linda Nelson of Dresser.  He is also survived by eight grandchildren Jack Trudell; Todd Nelson; Eric Nelson; Devin Trudell; Kara Gaspord; Joshua Bierbrauer; Jessica Bierbrauer; and Nicole Ballantyne; seven great grandchildren Sam and Ruby Trudell, Sienna and Marley Gaspord, Parker and Taylor Bierbrauer, and August Hric; two brothers Clifford and Gene Nelson and many nieces, nephews, extended family, and friends. Vern’s family deeply appreciates the staff, volunteers, and other residents the The Deerfield who treated Vern with great love, kindness, and respect over the past six years.  Thanks to Dr. Angela Brandes, Westfield Hospital and Clinics, for her medical expertise and ability to connect on a personal level with Vern.  This caring support was especially valued during the last few years in which he faced challenging health issues and the loss of loved family members.  Thanks to family and friends who were regular visitors and part of Vern’s care and support system.  As Vern loved to say about all his friends (and we can say about him), “They don’t make ‘em any better.” A memorial service was held Saturday, May 17, 2014 at 2:00 pm at The Deerfield Chapel in New Richmond.  Visitation was also held Saturday from 12-2 pm before the service at The Deerfield Chapel.  Private interment was in Oakland Cemetery in Star Prairie.  Memorials may be directed to The Deerfield.  Arrangements are with Bakken-Young Funeral & Cremation Services Beebe Chapel of New Richmond.