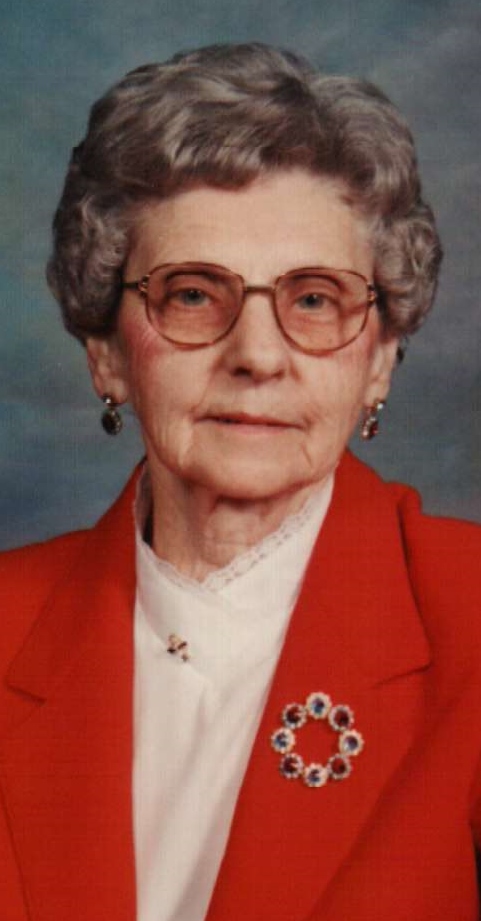 Stella Mae Ray age 93 of River Falls passed away Tuesday, June 9, 2015 at Kinnic Long Term Care Center.  She was born August 13, 1921 to Ben and Sadie (Price) Hoven in Pine Island, MN.  Stella was confirmed and baptized in the Christian faith on May 9, 1937.  On September 15, 1941, she married Ferris Ray.  To this union, six children were born; Bonnie, Gloria, Marilyn, Larry, Galen and Cindy.  Stella was a very hard worker all her life.  Working many years along with her husband on the dairy farm.  She always planted a large garden and with that came the canning and freezing of the vegetables and fruits.  She loved flowers and crocheting, making many fancy doilies.  Her family remembers her as a wonderful cook and baker, making the meals nearly all from scratch.  In her later years, Stella traveled, worked at her church, and helped her family and friends whenever she could.  In her last hours, she cried out to the Lord, “Come Lord Jesus and take me Home.”  She is now with our Heavenly Father at peace.  We will see you again, Mom.  Stella is survived by her children, Bonnie (Gene) Bock, Gloria Knight, Marilyn (Bud) Rud, Larry (Janel) Ray, Galen Ray, and Cindy Rud; 11 grandchildren, 21 great grandchildren; sister-in-laws, Maxine Hoven, Evelyn Baker; special friend, Polly Wymer; many nieces, nephews, and friends.  She was preceded in death by her husband, Ferris Ray; brother, William Hoven; parents, Ben and Sadie Hoven; son-in-laws, Jerry Hague, Richard Knight, and Dennis Rud.  A funeral service was held Saturday, June 13, 2015 at 11:00 am at First Congregation UCC in River Falls.  Visitation was held Friday, June 12, 2015 from 4-8 pm at Bakken-Young Funeral Home in River Falls and also Saturday from 10-11 am at church.  Interment was in Greenwood Cemetery.  Arrangements are with Bakken-Young Funeral & Cremation Services of River Falls.