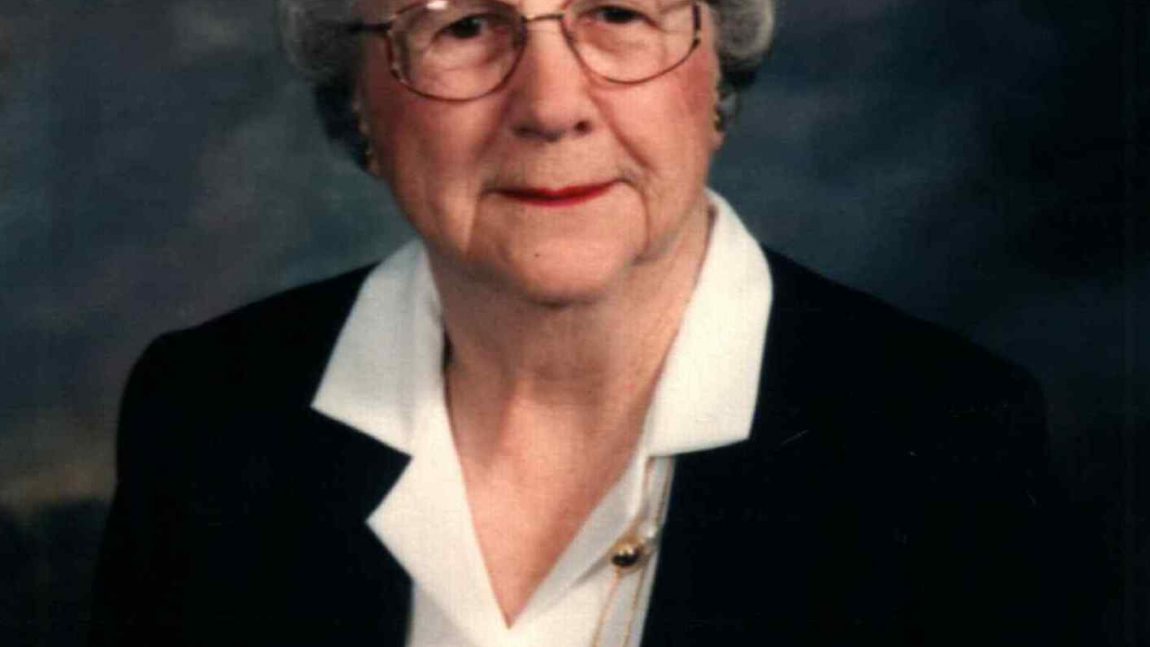 Sophie Fredrick was the fifth of seven children born to Caroline Marie Miller (nee Boehmann) and Christian David Miller on July 28, 1912, at Tintah, MN.  She grew up on a grain and dairy farm and attended school in Tintah.  After high school she worked as a waitress and in a candy store in Milwaukee, WI.

She eventually moved to Turtle Lake, WI where her brother, Reine Miller and her sister, Marie Geminder lived.  It was there she met and married Henry August Wickboldt on November 6, 1937.  She and Henry operated a dairy farm east of Turtle Lake.  They celebrated their 25th Wedding Anniversary in 1962.  They had two daughters, DeAn, born in 1942 and Joyce, born in 1947.

Sophie was a charter member of the local Homemaker’s Club, a member of the Lutheran Ladies Aid and the Altar Guild at Zion Lutheran Church in Turtle Lake, WI.  In later years she was a member of the Lydia Circle at First Lutheran Church in Rice Lake, WI.  As a homemaker she kept a large vegetable garden, canned or froze the produce, sewed for her daughters and baked bread regularly and often helped with farm work.  She played the piano by ear and loved to sing, dance, read, quilt, play cards and “visit”.

In 1965, Henry died of multiple myeloma.  A farm auction was held and Sophie moved to Rice Lake, WI. She worked in a drug store and The Golden Rule Dress Shop.   In 1967, Sophie’s 20 year old daughter, Joyce was killed in a car accident.

In 1968, Sophie married Walter Fredrick.  They celebrated their 25th Wedding Anniversary in 1993.  They lived on a farm north of Rice Lake, WI.  During those years she enjoyed a full life with her step family which included Leila Fredrick, Marlow and Jan Fredrick, and grandsons Brian and Scott, and several in-laws.  Sophie and Walter took many trips in their camper.  Walter died in 1994.

In 2001, Sophie moved to River Falls, WI to be near her daughter, DeAn.  She lived at Wellhaven and The Lutheran Home and enjoyed the social life.  There she played the piano for birthdays, played cards and dominoes, worked jig-saw puzzles and did volunteer work for the Chamber of Commerce.  She was a member of Luther Memorial Church.

Sophie is survived by her daughter and son-in-law, DeAn and Bob Krey of River Falls; step-son and his wife, Marlow and Jan Fredrick of Rice Lake; two step grandsons, Brian and Scott Fredrick and their families; and many nieces and nephews.

A Memorial Service will be held on Saturday, August 23, 2014 at 2 pm at Luther Memorial Church in River Falls.  Visitation will also be Saturday from 1-2 pm at the church.  Interment will be in Lakeview Cemetery in Turtle Lake at a later date.