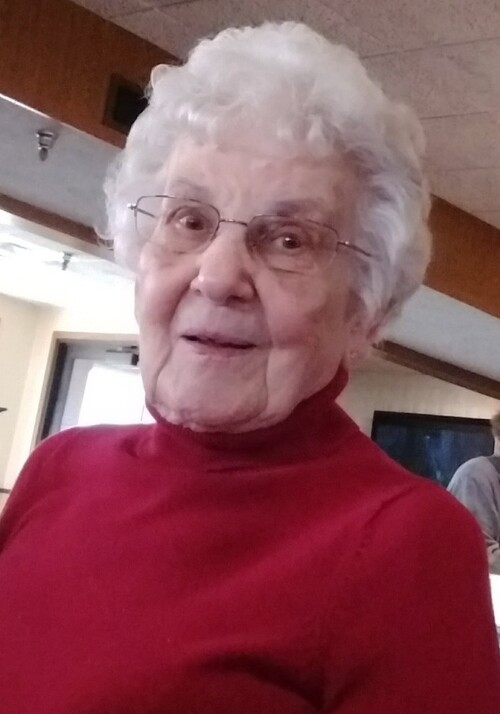 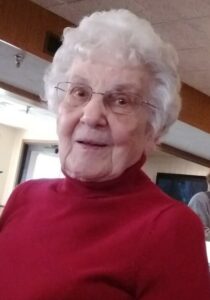 Rosemary Lenzen, age 95, of River Falls WI, peacefully passed away in the presence of her children on November 8, 2022 at The Willows in Hudson WI. Rosemary was born February 4, 1927 in Hankinson ND to John and Veronica (Novack) Birnbaum. She grew up on the family farm, attended school at St. Francis Academy in Hankinson and at Providence High School in Chicago IL. Following high school, she taught in a one-room schoolhouse near Hankinson. On August 30, 1948 she married Raymond Lenzen at St Philip’s Catholic Church in Hankinson. In 1949, they moved to River Falls where they farmed in the Clifton Hollow area and eventually moved into River Falls. In 1980 Raymond and Rosemary went out to live in Estes Park CO, returning to River Falls in July 1986. One year later Raymond passed away. In 1987 Rosemary began working at The West Wind in River Falls as a waitress and hostess, serving for over 20 years until retiring at age 85. Rosemary and her husband sang duets in their church choirs for years, and Rosemary continued singing, as well as serving as a sacristan, reader and leading the hymns for daily Masses, right up to her major stroke in May 2018. She was known for beautiful flower beds wherever she lived, and for the tins of delicate Christmas cookies she made and gifted to others for years. She included her children, grandchildren, and even great-grandchildren in the making and decorating of 100s of cookies. Rosemary enjoyed games with family and friends, especially Cribbage and Scrabble, and taught her great-grandchildren the fun of playing them. She loved lunches with her friends, cooking and baking sumptuous feasts for family gatherings on holidays and birthdays, keeping up contact by email, and traveling to visit her siblings wherever they gathered in Minnesota and North Dakota, or hosting them here in Wisconsin. Rosemary was preceded in death by Raymond, her husband of 39 years; her son André; her son-in-law Larry Smith; her siblings Lawrence, Lorraine, Cecelia “Beanie”, and James “Jimmy”; and all of Raymond’s siblings. She is survived by her daughters Jennifer, Barbara Smith, and Rebecca; her sons Douglas, Raymond, Joseph (Sandy), Michael (Stacy), Bruce, Jeffrey, and John; her grandchildren George (Rhonda), Daniel, Stephen (Jessie), Kristin, Nicole (Alec), Davis, Austin (Ellayna), and Sam; her great-grandchildren Barley and Chloe, Dante and Silvia, Autumn and Chloe, and Kingston; and her siblings John (Pam), Leona, Agnes, and Raymond (Marilyn), as well as many nieces, nephews, cousins. A Mass of Christian Burial was held on Saturday, November 19, 2022 at 11 am at St. Bridget Catholic Church 211 E Division Street River Falls, WI.  Visitation was on Saturday, November 19, 2022 from 9-11 am at the church.  Interment was in the St. Bridget Cemetery in River Falls.  Cards and memorials may directed to:  The Family of Rosemary Lenzen C/O Bakken-Young PO Box 43 River Falls, WI 54022.  Arrangements are with Bakken-Young Funeral & Cremation Services.