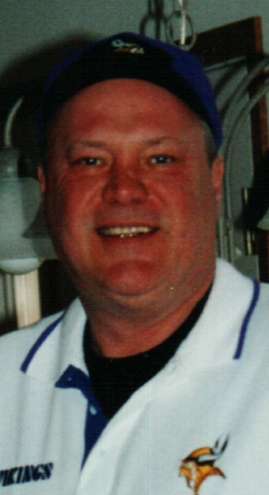 Ronald Arthur Nelson, 58, of River Falls died Wednesday, December 4, 2013 at his home.  He was born to Glenn and Mabel Nelson on June 13, 1955 in Red Wing, MN.  He grew up in River Falls and graduated from River Falls High School in 1973.  He was an All State and All Conference Football player in high school.  He attended the UW- River Falls.  At age 21, he married and shortly thereafter was divorced.  When he was 32 years old, he married Linda Schoenthaler on August 22, 1987.  They were blessed with two children, Timothy and Jeremy.  Ron and Linda raised their family in Oakdale, MN.  Ron and Linda moved to River Falls in 2011.  Ron’s primary employments were for Schwann’s as a delivery salesperson and American Spirit Graphics as a printer.  He enjoyed many family vacations in Minnesota, Wisconsin, Florida, Wyoming, Colorado, Canada, Missouri, Montana, Nevada, Arizona, and Ohio.  He enjoyed fishing, hunting, watching football games, and spending time at Yellow Lake in Wisconsin.  He was preceded in death by his parents, Glenn and Mabel; sisters, Marilyn and Charlene; brother-in-law, Gerald Kielas; and nephew, Brian Rohl.  He is survived by his wife, Linda; sons, Timothy and Jeremy; sister, Karen Kielas; brothers-in-law, Leo (Butch) Rohl and Lyle (Carrie) Schoenthaler; sisters-in-law, Deborah and Diane Schoenthaler; nephew, Joshua (Sally) Hauge; nieces, Sandra Rohl and Stacy (Justin) Bystrom; mother-in-law, Janet Schoenthaler; many other relatives and friends.  A memorial gathering for family and friends was held Sunday, December 8, 2013 from 2:00-6:00 pm with a brief service at 2:30 pm at the Bakken-Young Funeral Home in River Falls.  Sandwiches and refreshments were served.  Arrangements are with Bakken-Young Funeral & Cremation Services of River Falls.