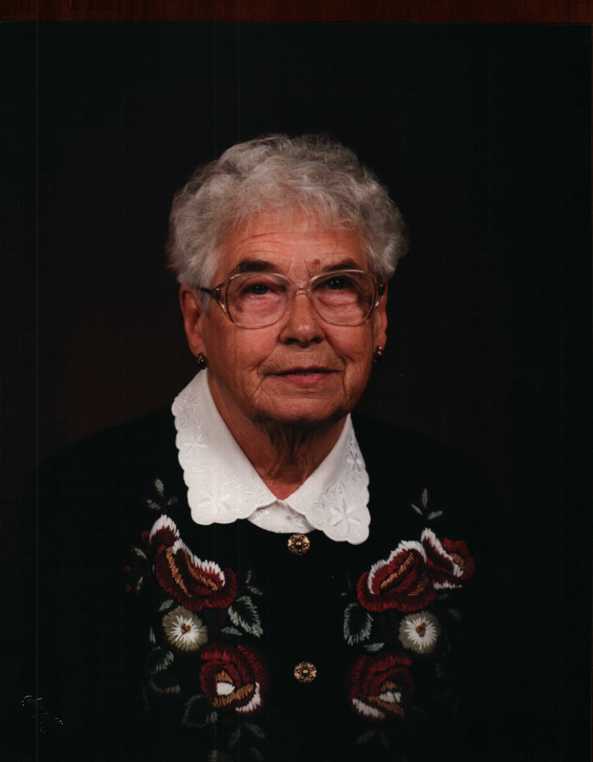 May 28, 2014
Romkje “Rom” (Minkema) Van Dyk, age 92, died Tuesday, May 27 at The Deerfield in New Richmond. Rom was born October 19, 1921, as a twin, at her parents’ home in Wieuward, Friesland, the Netherlands. Her parents were Hendrik and Riemertje Boonstra Minkema.  Rom was the epitome of strength: a WWII survivor, dedicated wife, mother of six, and grandmother and great-grandmother to many.  In Holland, she attended the equivalent of high school and then Huischoudschool. Rom survived the German occupation of Holland from 1940 to 1945. In April of 1945 she and Jan Van Dyk were married. Jan was an agricultural agent but longed to farm on his own, which was impossible for him in the Netherlands because of the lack of land available to new farmers. So, with their then five children, the Van Dyks emigrated to the United States in 1955, initially settling in Minnesota but then locating to a rented farm at River Falls and then to a farm at New Richmond. In 1968 the Van Dyks with their son Gerrit bought a farm south of New Richmond. Later their son Bill joined the operation. Now her grandsons Jeff and Brian work with their fathers. Rom was a helper on the farm and often milked cows both morning and evening.  In addition to farming, Jan and Rom also enjoyed visiting family in the Netherlands, making numerous trips back. Rom was a talented sewer, knitter and baker and always had a supply of desserts and sweets on hand for guests. She was an avid gardener and every summer on the farm planted varieties of vegetables that she canned in the fall, typically canning 52 jars of each variety.  Rom was a member of the Erin Prairie Homemakers and later the Nike Neighbors Homemakers. She accompanied her children to meetings of the Challenger and then Springbook 4-H Club for many years and was a knitting leader for more than 25 years. She avidly participated in the St. Croix County Fair for many years, visiting exhibits and barns and enjoyed entering projects, winning many championship ribbons with her knitting.  Both Rom and Jan were members of Farm Bureau and Rom was a recipient of the Farm Bureau “Woman of the Year” award.  Rom and Jan moved off the farm in 1996 to a condominium in New Richmond. Jan passed away in 1997. Rom continued to live there until 2006 when she moved to The Deerfield in New Richmond.  Rom was preceded in death by her parents, her husband Jan, her twin sister Uilkje, grandson Jason Van Dyk and niece Riemy Venema.  Rom is survived by her six children: Hendrik (Bonnie); Gerrit (Pat); John (Eileen); Bill (Cindy), all of New Richmond; JoAnn Van Dyk-Adams (Paul), of Eleva; and Rita Van Dyk-Hawley (Tom) of Baldwin.  Surviving grandchildren are: Dan (Aly) Van Dyk; Allison (Rick) Zaccardi; Jordan Van Dyk; Claire Van Dyk; Jackie (Steve) Kumm; Julie (Troy) Elmer; Jeff (Becky) Van Dyk; Jenny (Mark) Larson; Chris (Rikki) Van Dyk; Greg (Stefanie) Van Dyk; Laura (Josh) Ulrich; Kim (Ryan) Jacobson; Peter Van Dyk; Brian Van Dyk; Tim (Kris) Adams; Becky (Jody) Larson; John Hawley; Kelly Hawley; and Ellen Hawley.  Surviving great grandchildren are; Owen and Everett Van Dyk; Anika and Gus Zaccardi; Zach and Nick Elmer; Savanna Van Dyk; Clayton Van Dyk; Jacob and Josh Van Dyk; Tyler and Ben Larson; Tyler, Derek, Lane and Landon Van Dyk; Alexandra, John and Kate Van Dyk; Reese and Eva Ulrich; Morgan Jacobson; and Kennedy DeBartolo.  A funeral service was held Monday, June 2, 2014 at 11:00 am at the New Richmond United Methodist Church with Rev. Cathy Hamblin officiating. Special music provided by Megan Martinson and Barb Peterson.  Visitation was held Sunday, June 1, 2014 from 4:00-8:00 pm at Bakken-Young Beebe Chapel in New Richmond.  Visitation was also held Monday from 10:00-11:00 am at the church.  Interment was in Boardman Cemetery.  Bearers are: Dan Van Dyk, Jeff Van Dyk, Chris Van Dyk, Greg Van Dyk, Peter Van Dyk, Brian Van Dyk, Tim Adams and John Hawley. Honorary bearer is Jason Van Dyk.  Arrangements were with Bakken-Young Funeral & Cremation Services Beebe Chapel of New Richmond.
About bakkenadmin