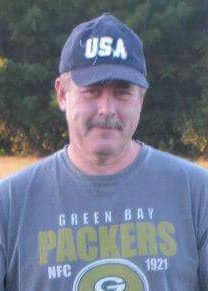 Robert “Bob” M. Crabb, Jr age 57 of Baldwin passed away peacefully on Sunday, June 26, 2016 at his home.  Robert loved the 4th of July holiday and the family celebrated every year at Wild Mountain in Taylors Falls, his family will continue this tradition in his memory.  Robert also loved being outside and walking his dogs early in the morning.  He will be remembered as a loving grandfather, who enjoyed taking the kids bowling and to eat at Shelly’s Northside Café in Baldwin. He is survived by his daughter, Jenna (Nick) Oak; step-son, Shane LaCroix; son, Jacob Crabb; grandchildren, Braelyn and Raegan Oak; step-granchild, Elizabeth Hurst; former wife and close friend, Cindy Nesteby; father, Robert Crabb, Sr.; brothers, Raymond and Greg Crabb; nephew, Devon Crabb.  Robert was preceded in death by his mother, Ardith Crabb.  A memorial gathering and barbeque will be held on Saturday, July 9th at 2 pm at Robert’s home.  Those attending are invited to wear Packers colors in support of Bob’s favorite and beloved team.  He will be missed deeply by his family and to quote Robert, “See ya later, alligator.”  Cremation services were provided by Bakken-Young Funeral & Cremation Services of Baldwin.