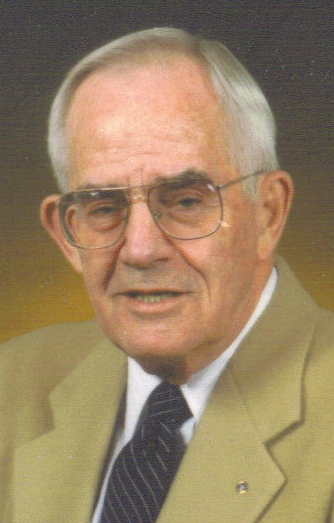 Bob Heebink, of New Richmond, died February 23, 2014 in New Richmond, WI, at The Deerfield Gables.  Bob was born to Herman G. and Gusta (Geisness) Heebink in Baldwin, WI on July 31, 1919.  He was married to Marie F. Van Someren on June 2, 1942 at the Baldwin Christian Reformed Church, Baldwin, WI.  Three sons were born to this union: James (Colette) of New Richmond, WI, Thomas (Marion) of Pacific Grove, CA and Paul, of Yuma, AZ. Also surviving are five grandchildren and one great-grandchild.  His wife, Marie, sister, Helen (Lloyd) Karnes, and his mother and father preceded him in death.  Bob’s youth was spent on a farm south of Baldwin.  He attended grade school and high school in Baldwin.  In 1941, he was awarded a B.S. degree from the State Teachers College – River Falls in Agricultural Education.  He received his master’s degree in agricultural education from the University of Minnesota in 1963.  Bob taught vo-ag and mathematics at Roberts High School before being inducted into the Army on August 8, 1942.  In the 40th Combat Engineers, Bob served in Africa, Sicily, Italy, France and Germany as a reconnaissance staff sergeant for more than three years.  After his discharge in September, 1945, he worked briefly in agricultural extensions and real estate sales.  In September, 1948, he began his 52 years of service to the New Richmond School District as a World War II veteran on the farm trainer, a high school agriculture instructor, vocational coordinator, and a Community Education Director.  The New Richmond Community Education program was started by Heebink in 1980.  It grew to be a model program on a state and national level.  In his involvement with various organizations and programs, he served as a secretary for United Way for eleven years the New Richmond Park Board for 26 years, the Wisconsin Community Education Association and the Friday Aquatic Center Task Force. Heebink also held the office of the New Richmond Kiwanis President in 1986.  He joined the club in 1959.  Bob enjoyed doing home beautification activities, fishing, golfing, ballroom dancing, and traveling with Marie.  For efforts he devoted to education and the community, Bob was privileged to receive numerous forms of recognition.  Some of these citations included The Wisconsin FFA Honorary Degree in 1974, and the American FFA Honorary Degree in 1980.  In 1987 he received the National Professional Award from the National Community Education Association.  The New Richmond Chamber of Commerce gave its first “Citizen of the Year” recognition to Heebink in 1992.  In the year 2000, Bob’s name was placed with the charter group of the Wisconsin Community Education Association’s Hall of Fame.  Memorial services were held at the New Richmond United Methodist Church on Tuesday, March 4, at 11 a.m. with visitation one hour prior to the service.  Visitation was also held on Monday, March 3rd, at the church from 4-8 p m.  Memorials will be directed to an existing scholarship at New Richmond High School in his name.  Arrangements are with Bakken-Young Funeral & Cremation Services Beebe Chapel of New Richmond.