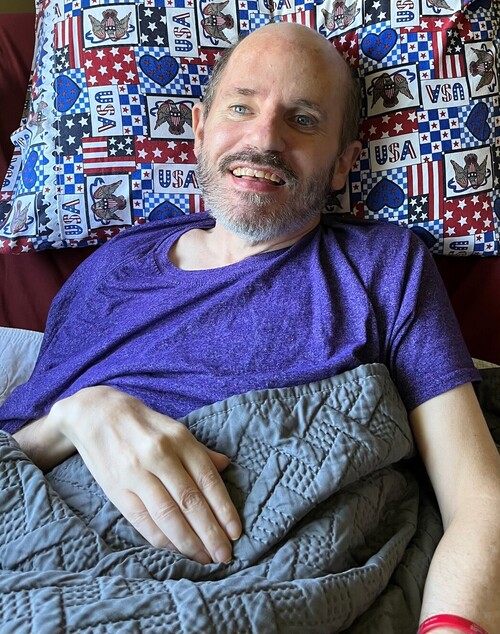 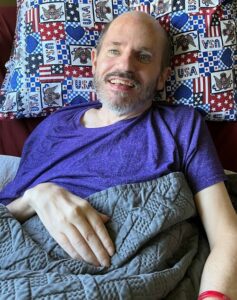 Robert Leon Hamble, age 53 of Boyceville, WI, formerly of New Richmond, WI, died on Tuesday, September 13, 2022 at the Deerfield Gables in New Richmond. Rob was born the son of Glenn and Bernadette (Hoye) Hamble on May 27, 1969 in St. Paul, MN. He grew up in New Richmond, WI graduating from New Richmond High School with the class of 1987. After high school, Rob joined the United States Marine Corps, serving from 1987 – 1992. While on base, Rob was in an accident and suffered a traumatic brain injury. He has spent the past 32 years living in various group homes, the past four years at Helen’s Home in Boyceville, WI. Rob held a few jobs including St. Croix Industries, Goodwill, and the Super 8. He enjoyed watching TV, especially “Friends”. He loved 80’s music. Rob loved spending time with his family, he was an inspiration to each of them. He had great sense of humor, was easy going and loved a good conversation. He was a strong man, enduring many difficulties after his accident. He was a proud Marine and an avid Vikings and Twins fan. He is preceded in death by his parents, Glenn and Bernadette Hamble. Rob is survived by his siblings, Deb (Paul) Wiederhoft, Diane (John) Rose, Lynn (Greg) Hatella, Rick (Stacie) Hamble, Ron (Sheri) Hamble, Laurie (Greg) Powers; numerous nieces, nephews, and great nieces and nephews; other relatives and many friends. A Celebration of Rob’s Life was held on Sunday, September 18, 2022 with visitation from 1-3:30 pm followed by a memorial service at 3:30 pm at Bakken-Young Funeral & Cremation Services 728 S Knowles Avenue New Richmond, WI and streamed live through the link just below this obituary. Interment was in Immaculate Conception Cemetery in New Richmond. Arrangements are with Bakken-Young Funeral & Cremation Services.

Click here to watch the recording of Rob’s service