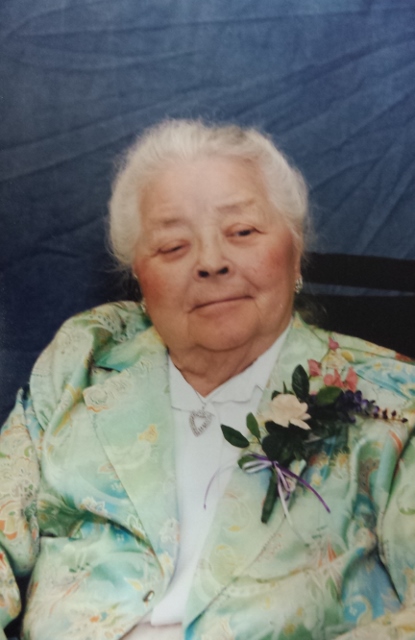 Phyllis Marie Reckin, age 89 of New Richmond, WI.  Beloved mother, grandmother and great-grandmother.  Phyllis was born October 6, 1925 in Menomonie, WI to Bertha (nee Hammer) and Edward Husby.  She attended elementary school at Hudson Road School, a one room country school, and then graduated from Menomonie High School at age 16 in 1942.  She attended Eau Claire Business College in Eau Claire, WI and worked the next two years at Midelfort Medical Clinic in Eau Claire as a secretary.  She married Donald W. Reckin in 1944 and moved to New Richmond in 1945 after Don returned from WWII.  Daughter, Vicki Lynne was born in 1945 and daughter, Ruth “Bootie” Ann was born in 1951.  Phyllis worked for the Credit Bureau of Western Wisconsin as head bookkeeper from 1956 through 1974.  Outside of work, she loved flower gardening, antiquing, walking, traveling, and cooking.  She was “famous” for her chocolate chip cookies and wild rice soup.  She was also known for her beautiful calligraphy style handwriting and was often asked to copy important documents so they could be framed.  She was a member of First Lutheran Church since 1945.  She was a faithful steward there and to many other charities from Christian radio to the Christian Education Center in Martin, Slovakia.  She was generous, loving, compassionate, creative and beautiful.  She was recognized for her sense of style and color, from her attractive clothes and jewelry to her high heeled shoes and purses.  More than anything, Phyllis loved spending time with her friends, family, children, grandchildren, and great-grandchildren.  Phyllis was a resident of the St. Croix Health Center from 2006 until her death on June 28, 2015.  She is preceded in death by husband of 32 years, Donald Reckin; parents, Edward and Bertha Husby; sister, Evelyn (Clifford) Resell, brothers, Theodore Husby, Ronald (Riley) Husby, and Edward Husby; and brother-in-law, Duncan Millar.  She will be deeply missed by children, Vicki (Loren) Burke and Ruth “Bootie” Reckin; grandchildren, Troy (Dawn) Kramer and Erik (Lori) Kramer; great-grandchildren, Adam (Kelli) Meyer, Keaton Kramer, Makenzie Kramer, Kennedy Kramer, Cole Kramer; sister, Margaret Millar; and many other nieces and nephews.  A Funeral Service was held on Friday, July 3, 2015 at 11 am at First Lutheran Church 218 County Road K New Richmond, WI.  Visitation was held on Thursday, July 2, 2015 from 4-8 pm at the Bakken-Young Beebe Chapel 112 W 3rd Street New Richmond, WI and on Friday from 10-11 am at the church.  Interment was in Mamre Cemetery in rural Menomonie, WI.  Arrangements are with Bakken-Young Funeral Cremation Services Beebe Chapel of New Richmond.