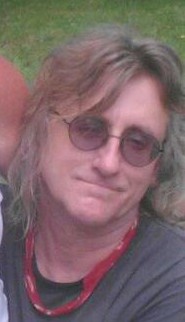 Peter J. Ault, 53 of Houlton, WI passed away unexpectedly on May 6, 2013 from (natural causes) that is believed to be of a broken heart by those that knew and loved him. He was a beloved father, son, brother, friend, and talented musician “Rock Star”.
He is preceded in death by his mother Sue (Harper) Ault, and by his soulmate and dear friend, former wife Rebecca J Ault.
He is survived by his father Gerald R. Ault (Susan), Bozeman, MT. His sister Kathy (Dale) Langford of Idaho, his daughters, Cassandra Alford, 33 and Melissa Remington (Donny), 32 both of Houlton, WI, and his son, Michael Aaron, 25 of Greeley, CO. He is also survived by his adoring grandchildren, Brendan Lee, Alexander, Olivia, Gracee, and “The Bears” Ashton and Austin. He will also be missed by many more loving family members and dear friends, Jon (Kimberly) Gilbertson, Michael Beaudry, Andrew Gruba, and Lee (Maria) O’ Daniel.
He was born May 29, 1959 in Sacramento, CA where he attended school until the age of 13. He then relocated with his family to Eden Prairie, MN and from there settling in Hudson, WI. He graduated from Hudson High School, Class of 1977. He went on to complete a two year degree in Cobol Programming and design at Northeast Metro Vocational College. He was employed by LDSI and American Family Insurance. He was an avid and talented bass guitar player. His music was his passion. He also enjoyed running and taking long bicycle rides. Peter and Becka’s favorite place to be and where their ashes will meet the Heaven’s was at the North Shore near Duluth, MN. He enjoyed agate hunting, computer games and listening to music. Final arrangements are being made by his daughter, Melissa at the Trinity Lutheran Church in Hudson at the 6th Street location the evening of May 16 from 6:30-8:00 pm. Memorials are preferred for his children to pay for his unexpected final arrangements and headstone. For address information please contact Melissa at 612-245-9797.