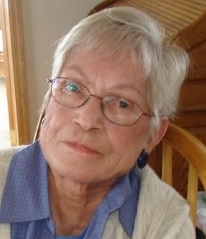 Mercedes S. “Mercy” Marson of Hudson passed away at home, March, 18, 2013 after her long, courageous battle with Scleroderma.

Mercy was born in La Union, New Mexico, December 29, 1929 to Jose and Juliana Salinas.  She graduated from Gadsden High school, Anthony, New Mexico in 1950, Valedictorian of her class.  One of her first post-high school occupations was as assistant to the founder of Valley Canning Company, (currently Old El Paso Foods, a General Mills product line for Mexican-style food).  She liked to tell us that the factory at that time was so small that her office was inside a silo.

Mercy took a position in 1952 with Ballistic Research Labs, White Sands Missile Range, Las Cruces, New Mexico. It was there that she met Thomas (Tom) Marson who was stationed at White Sands with the Army.  They were married Feb 6, 1954 in her home town parish church, St Patrick’s Church of Canutillo, Texas, a small town adjacent to the city of El Paso, Texas.

Mercy and Tom were blessed with 5 children: Michael, Mari, James, John, and Julie.

In 1964, Mercy helped move her family from the El Paso, Texas area to Hudson where husband Tom began a career with 3M Corporation in St. Paul, Minnesota. The family often made flying trips between El Paso, Texas and Hudson in their small private plane where Mercy was co-pilot to her husband, Tom.   Mercy was known to all as a sweet, gentle, kind, caring person who went out of her way to reach out to others, or to lend an ear and comforting hug. She was a master organizer, superb “accountant,” and tireless worker. Her greatest joy was to provide a loving home for her husband and children.  She was greatly involved for many years in St. Patrick’s Church Women’s Council (PCCW) and 4-H leadership with the Glover All Stars.  Fluent in Spanish, Mercy also taught Spanish at St. Mary’s Parochial school in New Richmond, Wisconsin.

During the family’s growing years, and later, she was a master planner and avid participant in weekly family camping and fishing trips where the family used everything from tents to motorhomes. She often said the best trip of all was one week of rough wilderness camping on Connor’s Lake in the Minnesota Boundary Waters Canoe Area.

All who knew Mercy remember her wonderful, easy going and caring personality.  Mercy possessed a quiet humility and took great pleasure in championing the accomplishments of others. She was always the gentle leader who got things done by quiet and thorough planning for any and all activities. She made things seem easy, but behind the success were hours of meticulous planning and even “dry runs.”

She is also survived by a brother, Marc Salinas,  and sister, Genoveva Salinas,  as well as daughter-in-laws Cindy (Michael) Marson and Kathy (James) Marson, grandson Cooper Marson, and dozens of cherished cousins, nieces and nephews.