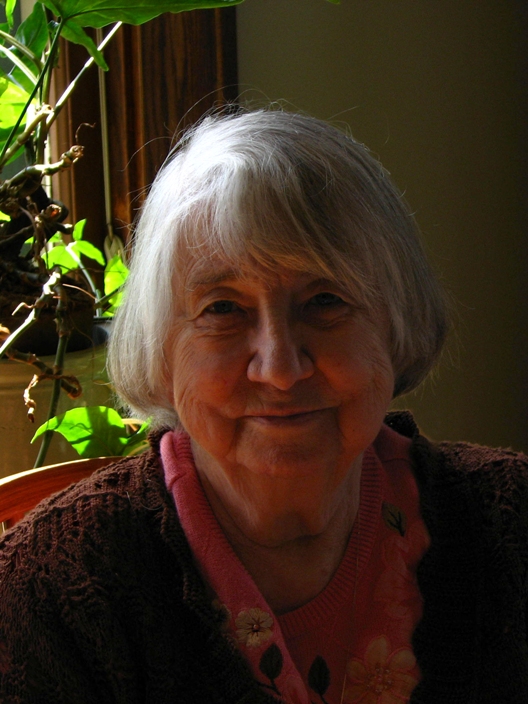 Marion Violet Koch passed away on November 11, 2012 in River Falls, Wisconsin. She was born at home in Polar, Wisconsin June 16, 1923 to Reinhart and Eleanora Kieper and lived in Wisconsin all of her life. As a child, she spent her days with her siblings, riding horses and helping to run the family dairy farm. She was outside in woods or fields enjoying wildflowers and wildlife and taught her children to do the same. Though she was an A student, her formal schooling ended at eighth grade. However, in 1991 she earned her High School Equivalency Diploma and stated, “There would be no old people at her class reunions,” (except her, of course!). She worked as a teenager in Antigo, then during WWII, in Sturgeon Bay, where she was not Rosie the Riveter, but Marion the Finished Navy Welder, building ships for the US Lend-Lease Program during World War II. In 1947, she married David John Koch of Antigo while he was serving in the Navy after having to wait a year from their original wedding date due to a train strike that detained him in San Francisco. After their marriage, Marion and Dave maintained a dairy farm seven miles east of Antigo until 1965. They lived briefly in River Falls from 1965 – 1966, and then moved to Oshkosh for two years until in 1968, when they settled five miles west of Spring Valley. They remained there until 2000, when they moved to Hixton. In 2007, Marion moved briefly to Woodville, and then to River Falls where she lived until her death.  Marion was a great cook and baker, as anyone who ate at her table knows. She created beautiful flower arrangements from her many gardens, and with her husband, Dave, produced much of their own food for many years. She worked for the Baldwin Greenhouse for 17 years. She volunteered her time and efforts to protect the lives of unborn children and was active in Lutheran churches in all of the communities in which she lived, the last was Luther Memorial Church in River Falls, where she enjoyed the vibrant community and attended weekly Bible study.  From 2008 until retiring to the Lutheran Home in 2011, Marion enjoyed the community of  Edgewater senior apartments in River Falls where she helped maintain hospitality, both serving her much appreciated baked items during morning coffee hours and cooking for those who were not able to cook for themselves. She was a regular (and merciless!) card player.  She was a favorite at the Lutheran Home, where many of the staff would stop to chat with her on their free time. She praised the Lutheran Home her entire time there.  She loved the Lord, she loved her family and she found great joy in being with them.  Preceding her in death are her husband, David John Koch (2003); daughter, Janis Kay Buell (1984); and grandson, Samuel David Buell (2000).  She is survived by four children, Cherry (Robert Danke) Koch-Danke, Nora (Peter Bougie) Koch, Valerie (Kevin) Anderson, and John (Deborah) Koch; nine grandchildren, Krista (David) Bethke, Amanda (Brandon) Danke-Enberg, Joshua (Nancy) Danke, Zackary (Tiffany) Buell, Hilary (Thomas) Boyer, Amaris (Rob) Moore, Cyrus (Lori) Anderson, Sophia Koch and Elias Koch; ten great grandchildren, Abigail, Dawson and Annelise Bethke, Sydney, Alec and Lucas Boyer, Jackson and Vincent Danke and Bryn and Grant Moore; brother and sisters, Gerhardt Kieper, Angeline Fischer, Marjorie Erlandson, and Darlene Raab.  Her funeral was November 14, 2012, 3:00 pm, at Luther Memorial Church, River Falls with the Rev. Scholz officiating. Friends may call at  the church from 1:00 pm until 3:00 pm.  A memorial has been established in her name for the Lutheran Home in River Falls, Wisconsin.  Arrangements are with Bakken-Young Funeral & Cremation Services of River Falls.