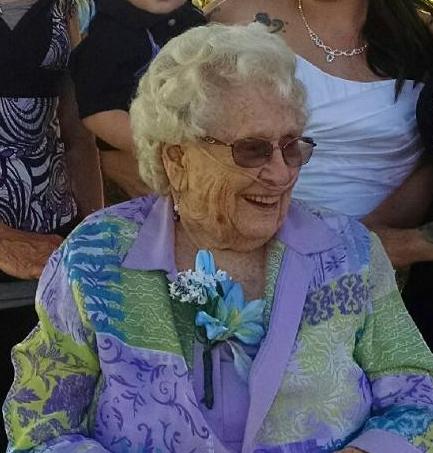 Marie Knefelkamp Knott was born May 11, 1916 in Luseland, Saskatchewan, Canada and passed away peacefully at the age of 98 on Thursday, August 21, 2014 surrounded by family and friends.  She was the fifth of six children born to Charlie and Mary (Schmale) Knefelkamp.  Her early school years were spent in a one-room school house.  She either walked or traveled by horse-drawn school bus in summer or sleigh in the winter.  In 1926, her family took nearly two weeks to move by train to Moose Jaw (Canada) and then to Withro, MN.  She attended school in Stillwater, MN until her mother was ill and needed care until her death.  She married Martin Denninger in 1936.  They had a son, Alvin, and a daughter, Mary Katherine.  In 1943 she obtained her citizenship papers and later divorced.  She worked hard to support herself and her children by driving school bus, milking cows, and housekeeping jobs for area families.  In 1945 she married Gordon Knott.  To this union was born a son and two daughters, Judith, Gerald, and Gloria.  They farmed side by side for 68 years.  During this time Marie passionately cared for the vegetable and flower gardens, raised chickens, and milked cows.  She preserved food and shared flowers with family and friends.  She crocheted and knitted countless afgans, baby blankets, sweaters, baptism gowns, slippers, and mittens for all who knew her.  She enjoyed taking classes to perfect her skills in cake decorating, sewing, and other needlework and crafts.  Over the years she devotedly cared for her family and friends.  She increased her efforts even more the last years of her life to care for Gordon as his health declined.  She was very proud to have five generations of family.  She was preceded in death by her brothers, Ed, Art, and Raymond; her sisters, Edna and Eleanor; grandson, Lawrence “Larry” Persells; son, Alvin Denninger; and husband, Gordon Knott.  Marie will be missed by her son, Gerald (Melanie) Knott; daughters, Mary Katherine (Dwaine) Persells, Judith (Jim) Hansen Jorgenson, Gloria Knott; her many grandchildren, great-grandchildren, great great-grandchildren; as well as sister-in-law, Bess Knott; nieces, nephews; and her many friends.  A Memorial Service was held on Wednesday, August 27, 2014 at 4 pm at Teens for Christ 538 Old Hwy 35 S Hudson, WI.  Memorial visitation was also Wednesday from 2-4 pm at Teens for Christ.  Interment was in the German Settlement Cemetery.  Arrangements are with Bakken-Young Funeral & Cremation Services of River Falls.