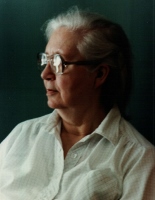 Marie S. Anderson, age 98, of River Falls passed away Wednesday, May 11, 2016 at the Kinnic Health & Rehab in River Falls.  She was born the 3rd child of Joseph and Mary (Fisher) Johnson on March 23, 1918 at Liberty Hill in Hudson.  At the age of 2, her family moved to Valley Creek, MN where she went to a country school and later her family moved to South St. Paul where they purchased a hotel.  Marie had to work at the hotel as a teenager.  She married Peter W. Anderson of Hudson and continued living in Hudson for the 62 years of their married life.  After Peter’s death, she continued living in Hudson for several years before moving to River Falls to be closer to her daughter, Virginia and husband Don Larson.  Marie was the last surviving member of her family.  Preceding her death were her parents; brothers, William, Robert and Harry; sister, Hattie; sisters-in-law; brother-in-law; and special friend, Jerry Chirhart of Hudson.  Marie is survived by her daughter, Virginia Larson and husband Don of River Falls; granddaughter, Betty Jean Hovde and husband, David of Great Falls, MT; great-grandchildren, Cody James Hovde and special friend, Shannon of Great Falls, MT; Casey Jean Zepp and husband, Matt of Tacoma, WA; and many friends in River Falls and Kinnic Health & Rehab.  A memorial service will be held Monday, May 16, 2016 at 11:00 am at Bakken-Young Funeral Home in River Falls.  Visitation will also be Monday from 10-11 am at the funeral home.  Interment will be in Willow River Cemetery in Hudson.  Memorials to: Alzheimer’s Association Greater Wisconsin Chapter ()3313 S Packerland Dr, Ste E, De Pere, WI 54115) Arrangements are with Bakken-Young Funeral & Cremation Services of River Falls.