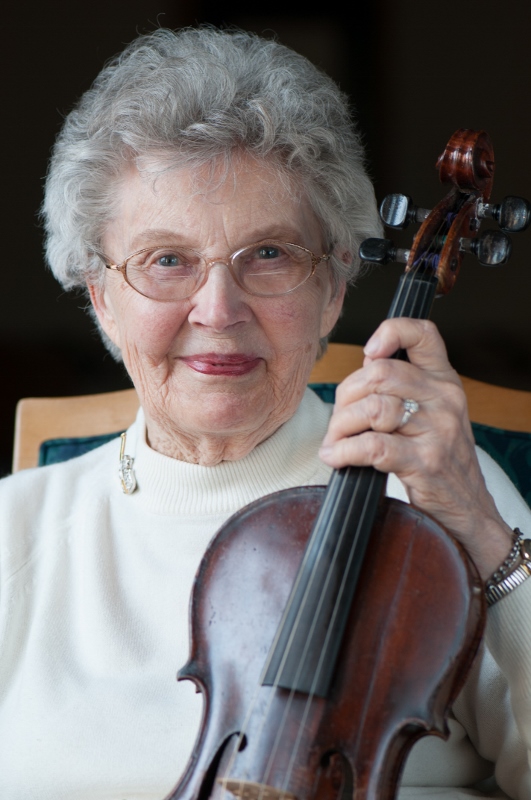 November 7, 2015
A new star shines bright in the sky and a sweet song is heard from a violin in the heavenly orchestra.
Mabel C. Jacobson Arnquist died peacefully on Nov. 6, 2015 at the age of 96.  Mabel was born in Deer Park, WI on September 2, 1919 to John H. Jacobson and wife Nilda, “Nellie” (Nilson) Jacobson.   She was the youngest of six children, with two sisters, Alice and Nina, and three brothers: Norman, Abner and Ishmael.  After graduating from New Richmond High School in 1938, she worked for seven years at the Ed Phillips & Sons Company in Minneapolis.  On October 14, 1947, she married C. Sabin Arnquist.  They settled in New Richmond where they ran Sabin’s family business, The Daylight Store.  Mabel was involved in many aspects of the business and was the buyer in the women’s clothing department. They raised two children, Kristi and Rolf.
One of Mabel’s precious gifts in life was music.  Her father, besides being a farmer, was a violin maker and self-taught fiddle player; music was always a part of her life. At age two, she started playing the piano by ear; by nine, she was taking lessons.  When the piano had to be sold during the depression, she began playing the violin.  While in school, Mabel was active in many musical activities and won several regional and state competitions.  As a young adult in Minneapolis, she played with the University Orchestra and sang in a women’s group who called themselves “The Chanters”.   After her marriage, she played with the River Falls Symphony and later, the 3M Symphony Orchestra.  She most enjoyed playing duets with her father and solos at local functions, in church, and at the Deerfield where she lived for many years.  She played until age 93 when an injury to a left finger made playing impossible.
Mabel had a generous spirit and a kind word for everyone.  She brought cheer to the many who knew her and will be deeply missed.
Mabel was preceded in death by her husband, Charles Sabin; her first born son, Charles Mark; siblings: Norman, Abner, Ishmael, Alice, and Nina. She is survived by her daughter, Kristi of Madison, WI; son, Charles Rolf, his wife Jan and their children Charles Jacob, Gabrielle, and Nathanael of Maplewood, MN.
A memorial service was held at the Deerfield Chapel in New Richmond on Saturday, November 14, 2015.   Interment was in the New Richmond Cemetery.  Arrangements were with Bakken-Young Funeral & Cremation Services Beebe Chapel of New Richmond.