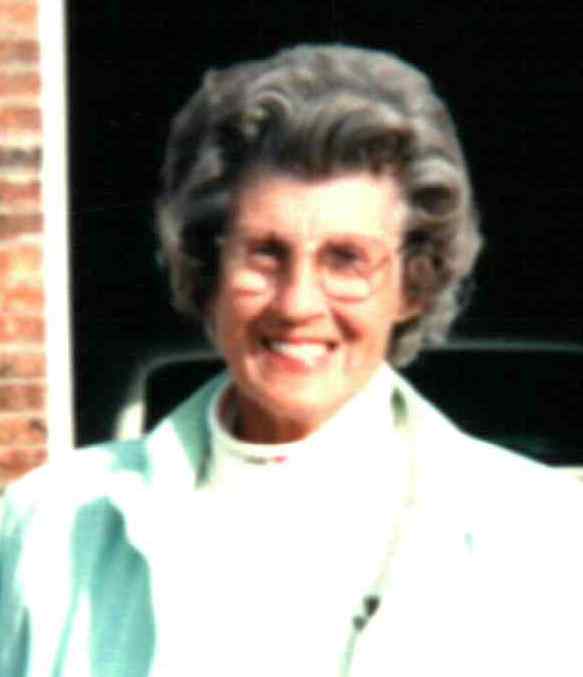 March 9, 2015
Lois Genevieve Hunter Bradley died as gracefully as she lived, on March 9, 2015.
The only daughter of William Earl and Genevieve Hunter, she was born in River Falls on March 23, 1927.  She graduated from River Falls High School in 1944, then enrolled at what is now UW-River Falls.  While there she met her husband, John..  They were on the college debate team together, sharing their love of words and civil discourse
Lois and John were married on April 6, 1946.  She always said that when she first moved to the family dairy farm she knew how to make only chocolate sauce and fudge.  After reading about it at the County Extension office, she and a couple of neighbors founded the Kinnickinnic Homemakers Club, where she learned to decorate cakes, tool leather and weave basketry in addition to learning about cooking, baking and canning.
She planted an enormous garden each year, where there was always a bed of strawberries among all the vegetables.  She was an accomplished bread maker.  Her pies were incomparable.  Her doughnuts and cookies – simply vanished.  She understood the way food and love are related and she fed, and loved, her family and friends countless times over the years.  She set a beautiful table.
A gracious hostess, she wasn’t afraid to open her home to large gatherings: her 50th class reunion, a pig roast/fundraiser for Congressman Steve Gunderson, family reunions and frequent family gatherings.
Lois served her community.  She volunteered at church and sang in the choir.  She was a 50 year local chapter member and held state offices in the Order of Eastern Star.  She served on and chaired the Hospital Auxiliary.  She worked as an elections clerk and election canvasser for decades.  She was a Wisconsin delegate to the 1984 Republican National Convention.
Lois worked at UW-RF in the purchasing department from  1962 until her retirement in 1989.  During this time she also continued her college education, working toward a degree in speech pathology.
Lois became an accomplished quilter.  She traveled the country attending workshops in quilting and appliqué techniques, taught classes from her home and made and gifted beautiful quilts to her daughters.  Her special loves were appliqué, piecework and hand-quilting.
Lois enjoyed traveling with John, with her daughters and with friends.  She twice traveled to Hawaii.  She and John drove the Al-Can Highway in 1977, before it was paved.  They cruised the fjords of Norway, the Panama Canal and the coast of Western Canada and Alaska.  They traveled to destinations such as New Orleans, San Francisco and Washington DC.  They visited their daughters in California and North Carolina.  Lois also enjoyed trips to the Grand Canyon with her daughters, to the Black Hills and Mount Rushmore with her daughters and granddaughters, and to Amish quilting country in Indiana and Pennsylvania with friends.  But the destination Lois loved the most was Venture Out, in Mesa AZ, where she and John missed more than twenty Wisconsin winters, enjoying warmer weather with special friends from across the country and Canada.
When asked about life accomplishments, Lois would say that she was most proud of raising her four daughters.  She showed them how to create homes where their families could thrive, and about the importance of being productive, every day.  She impressed on her daughters how fortunate they were to have sisters and the importance of staying in touch, regardless of distance or inconvenience.  Lois taught her daughters to work hard and to garden, preserve food, sew, cook, bake and treat animals (and people) with kindness.
Appreciation of literature and music were central parts of who she was, and she shared her love of both with her daughters and grandchildren.  She valued honesty and expected nothing less from those she loved.  The life she led exemplified her lifelong commitment to culture, responsibility and community service.  We shall miss her.
Lois was the devoted mother of Lee (Roger) Engebreth, Lynne (Peter) Hiltz; Gwen (Kevin) Kuchevar and Gail Buller; the delighted grandmother of Aaron (Katherine Caldwell) Engebreth, Elizabeth (Kyle) Bonderson, John (Nancy Olson) Engebreth, Rebecca (Brent) Albrecht, Karen Kuchevar (fiancé Tim Cox), Paul Buller and Cliff Buller; and the overjoyed great-grandmother of Daphne, Cora and Leo Engebreth and Henry, Sylvia and Haakon Bonderson.  She was preceded in death by her husband of 59 years, John W. Bradley, her parents, W. Earl and Genevieve (O’Mara) Hunter, her brothers, Robert and William, and son-in-law, Don Buller.
Lois lived her last four years at Comforts of Home in River Falls.  During the final months of her life, she and her family benefitted greatly from the support of St Croix Hospice.  During their time together, staff from both organizations cared for Lois and her loved ones devotedly, and with profound affection.  Her family requests that those wishing to honor her memory consider making gifts to either organization or to the Michael J. Fox Foundation for Parkinson’s Research.

A Memorial Service was held Friday, March 13, 2015 at 11 am at the First Congregational Church 110 N 3rd Street River Falls.  Memorial visitation was also Friday from 10-11 am at the church.  Private interment was in Kinnickinnic Cemetery.  Arrangements are with Bakken-Young Funeral & Cremation Services of River Falls.