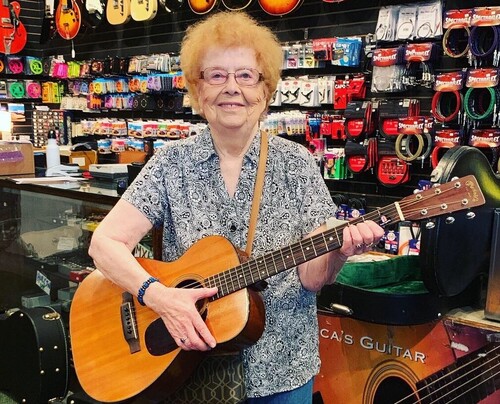 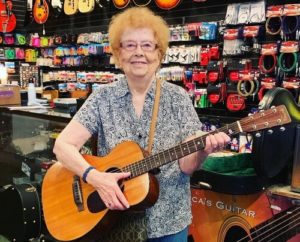 Lillian Gena Hanson, (nee Peterson) age 92 of New Richmond died Wednesday, January 15. 2020 at her home. Lillian was born the daughter of Ingval and Gena Peterson on September 5, 1927 in the Town of Alden in Wisconsin.  As a child, she loved to play kitten ball during the day, and at night she would sing with her family. As a teenager she got serious about a career in music. With her sister Helen, they formed The Michael Sisters group. Lillian sang lead, while Helen played guitar, and The Michael Sisters performed at schools and town fairs in northwest Wisconsin.  Their big break in country music came when they joined the Chippewa Falls Barn Dance and were mentored by and performed with Maggie & Scottie. For the next decade, they toured the Midwest and performed weekly on WEAU radio in Eau Claire. In the early 50’s they were invited to join the cast of the Sunset Valley Barn Dance on KSTP Channel 5 television in St. Paul, Minnesota. They performed hundreds of shows with host David Stone and musical leader Billy Folger. During this time, the Barn Dance would also support national acts that came to play at the Minneapolis convention center. Lillian had the opportunity to work with Roy Acuff, Johnny Cash, Kitty Wells, Loretta Lynn, George Jones, and many more country stars.  By the time the 60’s arrived, the love of her life appeared. That man was Warren Hanson. They were married on May 23, 1964 at West Immanuel Lutheran Church, where Lillian was a lifelong and devoted member. Lillian and Warren were a dynamic duo of goodness and smiles. They traveled extensively, including some impromptu Barn Dance reunions in Louisiana during the 1980’s.  After losing her soul mate Warren in 1993, Lillian soldiered on putting family first. Out of 10 Peterson children and spouses, Warren was the first to leave us and Lillian was the lone surviving Peterson child when the Lord came calling on January 15, 2020. Patience is a virtue, and now Warren and Lillian are together again. For many, she was the sweetest person they ever met, and is greatly loved and will be missed by her family and friends forever. Lillian is preceded in death by her parents, Ingval and Gena Peterson and all of her brothers and sisters. Lilian is survived by brother-in-law, Don Christopherson, and many nieces, nephews, relatives and friends.  A Funeral Service was held on Monday, January 20, 2020 at 11 am at West Immanuel Lutheran Church.  Visitation was also on Monday from 10-11 am at the church.  Interment will be in West Immanuel Cemetery.  Arrangements are with Bakken-Young Funeral & Cremation Services.