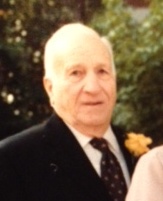 Lawrence Henry Klug, age 90 died on March 14, 2014 at the Lutheran Home in River Falls, Wisconsin. He was born on February 20, 1924 in Almena, Wisconsin where he lived until he graduated from Turtle Lake High School in 1942. He was the 9th of 11 children born to Adam Klug and Catherine Theis Klug. His wife of nearly 68 years, Merle Addrienne (Hunter) Klug died six days before him. He was also preceded in death by an infant daughter, Barbara Jean Klug; his sister, Marie Njavro; and six brothers, Joseph, William, John, Adam, Leo and George Klug. He is survived by three daughters, Leslie (John) Mercer, Ellen (Orian) Hunter, Joleen (Michael) Larson; son, Lawrence “Loren” (Bridget Farrelly) Klug; six grandchildren, Ashley (Brandon Sullivan) Mercer, Damian (Jen) Hunter, Hillary (Richard) Graves, Emily (Zac) Higgins, Aidan Klug, Molly Klug; seven great-grandchildren, Ian Sheridan, Ailish Sheridan, Davin Hunter, Jacob Hunter, Caden Hunter, Aurelia Graves, Alistair Graves;brothers, Carl Klug, Paul (Marilyn) Klug and August (Lynn) Klug. He attended River Falls State Teachers College 1942-43 where he met the love of his life, Merle Hunter. He entered the US Navy in July 1943 and served on USS Strickland, a light destroyer, in both the Atlantic and the South Pacific during WW II. Following his discharge, he and Merle were married on April 4, 1946. The newlyweds joined Merle’s parents on their dairy farm and soon assumed ownership. Their five children were born while they lived on the farm in Troy Township. Following retirement from farming due to arthritis, Larry had several careers – parts manager at Gilbert Auto in Hudson, owner of a business machine and office supply store, bike shops in River Falls and Spooner and knowledgeable hardware guy at several hardware stores. He is most remembered as the owner of the Walvern Hotel and Restaurant and later added the Walvern Manor Supper Club (now the site of Coaches Bar and Grill) on Main Street, River Falls. It was a family restaurant – the entire family worked there and served countless other families and individuals breakfast, lunch and dinner for 11 years. Larry was a quiet leader who sought out opportunities to serve church and community. He was an active member of the Knights of Columbus in River Falls and Spooner, serving as the Grand Knight in River Falls from 1989 – 1991. He was instrumental in the establishment of the KC food booth at the Pierce County Fair helping sell the project to the Pierce County Board where he served as a County Board Supervisor. The booth continues to be a major source of income for the River Falls KCs. Larry was Mayor of River Falls in the mid-seventies. He was a member and Chair of the River Falls Town Board. He also served on the Washburn County Board and was Chair of the Casey Township Board during the years he and Merle lived near Spooner on Lincoln Lake. He and Merle re-retired to River Falls in 2007 and lived in the Collinswood community where he gardened on the patio and was eager to chat with those who passed by and admired the flowers and vegetables.   Memorial Mass of Christian Burial was held on Wednesday, March 19, 2014 at 11 am at St. Bridget Catholic Church in River Falls.  Memorial visitation was held Tuesday, March 18, 2014 from 4-8 pm at the Bakken-Young Funeral Home in River Falls and on Wednesday from 10-11 am at the church.  Interment will be in Willow River Cemetery in Hudson, WI at a later date.  The family requests that in lieu of flowers memorials be directed to Adoray Hospice whose staff, as well as the staff at the Lutheran Home cared for Larry with respect and affection the last months of his life. Arrangements are with Bakken-Young Funeral & Cremation Services of River Falls.