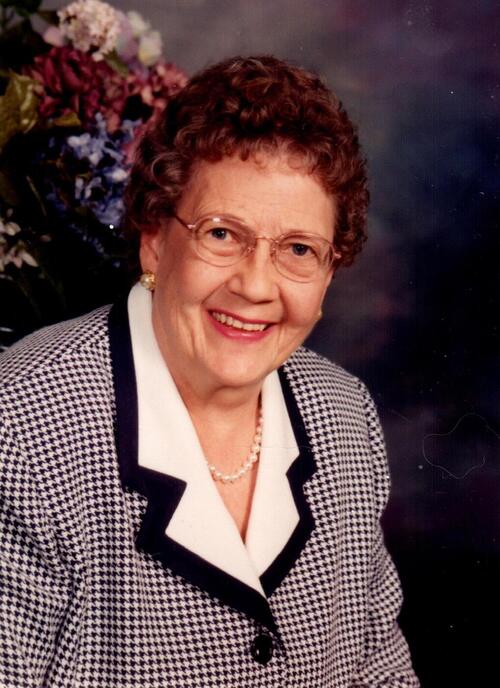 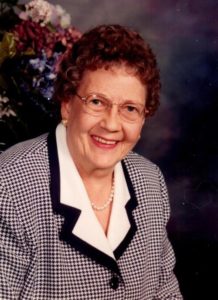 LaVonne Hove, age 88 of New Richmond, WI, died on Monday, January 25, 2021 at the St. Croix Health Center in New Richmond. She was born the daughter of Leonard and Clara Jordahl in Lake Park, MN on August 26, 1932. LaVonne grew up in Lake Park and graduated from Lake Park High School, class of 1950. She grew up working at Jordahl’s Grocery Store, which her father and uncles owned. When she was young, she swept the floors, then with age came the responsibility of working at the cash register, which was much more fun. LaVonne married Alan Hove on September 23, 1951 at Lake Park Lutheran Church in Lake Park, MN. After her marriage to Alan, LaVonne was happy to be a stay-at-home mom with three boys, Wayne, Jim and Dan. In 1962, they moved to New Richmond, WI where she worked with Alan at their Coast-to-Coast Hardware Store. When daughter, Linda, arrived, LaVonne was happy to return to her job as a stay-at-home mom. It was not until years later when LaVonne and Alan retired, that she decided to keep busy by working part-time at Pete’s Pizza. She often spoke of the great friends she made during those years at Coast-to-Coast and Pete’s Pizza. LaVonne was an active member of First Lutheran Church and Eastern Star. Growing up in Lake Park, LaVonne spent many days at her family’s cabin on Big Cormorant Lake, where she learned to fish and water ski. She enjoyed bird watching and loved animals, especially cats. Through the years, LaVonne and Alan enjoyed traveling and camping with their family. They especially looked forward to the winters they spent in Florida in their motorhome. After Alan passed in 1997, LaVonne continued her travels by taking cruises and a trip to Norway. She also enjoyed volunteering at the hospital gift shop. LaVonne was a loving wife, mother and grandmother. Her family always came first. She attended all her children’s and grandchildren’s special occasions. The grandchildren all knew where Grandma’s candy drawer was and that she was always willing to play with them. We will miss her special strawberry rhubarb sauce, strawberry freezer jam and her delicious lefsa, which she only made at Christmastime. LaVonne is survived by her four children, Dr. Wayne (Julie) of Stanley, WI, Dr. James (Diane) of Kissimmee, FL, Dr. Daniel of Allenton, WI and Linda of New Richmond, WI; six grandchildren, Krista (Kyle) Mahan, Benjamin (Jennifer) Hove, Andrew (Elizabeth) Hove, Alissa (Christopher) Schneider, Tina Hove, and Lisa (Jason) Kopp; seven great-grandchildren, Damon and Kairi Mahan, Aria and Bianca Schneider, Alexis, Teagan and Jason Kopp; sister-in-law, Sandy Hove of The Villages, FL; and LaVonne also leaves her cousins, nieces, nephews, and their children. She is preceded in death by her parents, Leonard and Clara Jordahl; In-laws, Hans and Sarah Hove; husband, Alan Hove; brothers, Melford Jordahl in infancy, Charles (Agnes) Jordahl, and Myron (Eleanor) Jordahl; and brother-in-law, Robert Hove. Our family would like to express our deepest gratitude to Carlene Jensen with Touching Hearts at Home, the staff at St. Croix Health Center, and the Lakeview Hospice team who provided kind and compassionate care to our mother and grandmother. Memorials may be directed to First Lutheran Church in New Richmond, WI or Lakeview Hospice in Stillwater, MN. A Memorial Service for Lavonne will be held on Friday, June 18 at 11:00AM at Bakken-Young Funeral & Cremation Services (728 S. Knowles Ave) in New Richmond with a visitation one hour prior to the service. Arrangements are with Bakken-Young Funeral & Cremation Services.