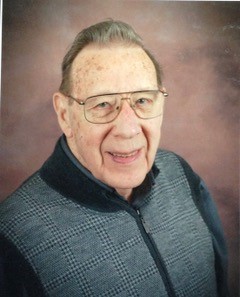 Laurence W. Sutten, age 91, of River Falls, WI, died Monday, August 3, 2020 in River Falls. He was born on July 30, 1929 to Duncan & Bertha Sutton of Little Falls, WI. He lived in rural Wisconsin until his teenage years when he moved to Iowa to live with his half-brother Kenneth Sutten. Larry worked at his brother’s gas station and garage until graduating from high school in Newburg, IA. He then enlisted in the Army and served in the Korean War. He was assigned to manage a mobile battle-map library a few miles behind the front lines. When the communist Army of North Korea made its rapid push to the south in June of 1950, Larry and his maps were only a couple of miles ahead of them. Upon returning to the U.S., he eventually was employed at Andersen Windows in Bayport, MN and attended school at UW-River Falls.

On December 18, 1954, he married Joyce Elenore Markgren at Augustana Lutheran Church in Cumberland, WI. They began their life together in Stillwater, MN and started their family, eventually having five daughters. In 1959, they moved to River Falls, WI, where he continued his employment at Andersen and finished his education at UW-River Falls, graduating with a bachelor’s degree. Larry continued his career at Andersen Corporation and began working in the Purchasing Department; he spent many years as a glass and lumber buyer, retiring in 1993 as the Purchasing Manager.

At home, Larry was kept busy raising a family and completing endless do-it-yourself projects. He was involved with Toastmasters, The American Legion, Ezekiel Lutheran Church, and liked to fish locally and in Canada. In retirement, Larry and Joyce spent their time traveling the U.S. and abroad.  They spent many of their winters in Mesa, AZ, making new friends and meeting up with old ones. He enjoyed all sorts of games — cards, board games, yard games, sports and fishing. Throughout his life, Larry taught his daughters to have a strong work ethic, love family and friends, help others, laugh, and play.