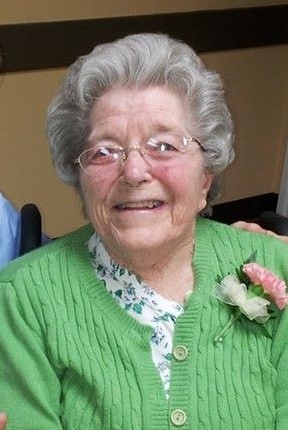 January 5, 2016
Mrs. Laura Belle Neal, 88, formerly of Sodus, Michigan, passed away peacefully at the Kinnic Health and Rehab in River Falls, WI on January 4, 2016.  She had lived there for 5 years.
Visitation was from 10:00 to Noon at Chapel Hill Church with the service at noon on Saturday, January 9, 2016. Burial followed at Shanghai cemetery.  Funeral luncheon followed at the church.
Mrs. Neal was born April 15, 1927 in South Bend, IN, the daughter of Everett Samuel and Doris Ellenor (Burgoyne) Casper.  She was married June 28, 1947 to Walter Maurice Neal at the Church of the Brethren in New Troy, MI.  He preceded her in death in 1985.
She was also preceded in death by her parents, a sister, Ruth Catherine Milnickel, three brothers, George Henry, Everett Daniel (Phyllis), of  Niles, MI, and Harley Dean (Betty) of Granger, IN. and a half-sister, Vera Jean Maggio (Vince) of Coraopolis, PA.  She is survived by two sisters, Lauretta Grezesiak of Lakeville, IN and Dorothy Ann Daniels  of Pine Bluff, AR ,  a brother, Donald Leroy (Gerri) of South Bend, IN., half – sister, Carol Avants of Mishawaka, IN., and  half-brother Willard Martin (Lois) of Granger, IN.  Surviving are two children, Timothy Alan (Joanne), of Columbia, SC and Patti (Darryl) Miller of River Falls, WI.  She is also survived by four grandchildren Brady, Laurie Hickman (Jesse), Andy, and Traci Jo and 27 nieces and nephews.
She and her husband had lived in the Eau Claire area, near Shanghai Corners.  She lived in the Eau Claire / Sodus area for 60 years.  She was an active member of the Chapel Hill United Methodist Church in Sodus, MI.
Her family would like to thank Kinnic Health and Rehab for the many years of loving care and also St, Croix Hospice. Also a thank you to all of her family and friends who never forgot to send her cards and letters.
Memorials can be made in her name to Kinnic Health and Rehab or Chapel Hill United Methodist Church, Sodus, MI.
Bakken-Young Funeral & Cremation Services and Bowerman Funeral Home were in charge of services.