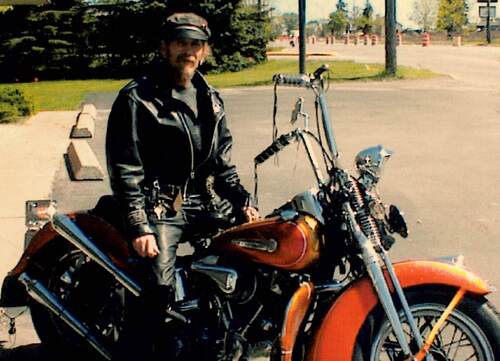 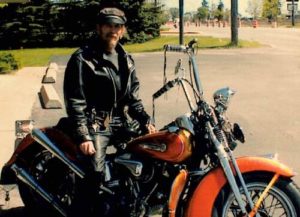 Kevin “Knucklehead” Stark, age 66, died on Wednesday, December 8, 2021 at his home. He was born the son of Harold and Phyllis Stark on March 15, 1955 in Mankato, MN. Kevin grew up in North Saint Paul, attending Stillwater High School. Following school, he joined the US Army from 1972-1974. Kevin was a free spirit with a gypsy soul. He loved to tinker and was an artist. Kevin had a kind heart and enjoyed visiting family and friends in need. He drove is 1947 Harley “knucklehead” all over the place. Kevin is preceded in death by his parents, Harold and Phyllis Stark; brother, Roger Stark; and infant sister. He is survived by son, Vince Ebertz; daughter, Angie Ebertz; grandchildren, Cash and Annamae; siblings, Kerry (Fran) Stark and Sharon Peterson; and many other relatives and friends. A Memorial service was held on Thursday, December 16, 2021 at 4:00PM at Bakken-Young Funeral & Cremation Services (728 S. Knowles Ave) in New Richmond with a visitation one hour prior to the service. Military Honors were performed by the Butler-Harmon American Legion  Post 80. Arrangements are with Bakken-Young Funeral & Cremation Services.