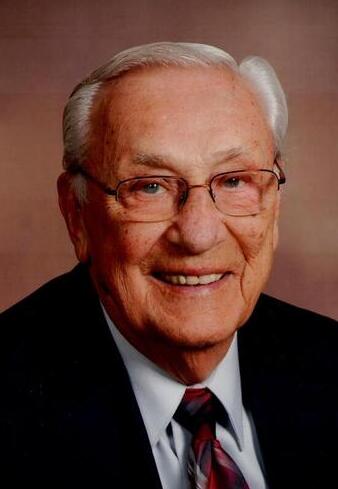 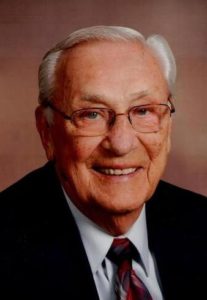 John Sidney Helling, Jr age 94 of New Richmond died Friday, May 15, 2020 at the Deerfield Gables Care Center. John was born March 29, 1926 and grew up on a large acre farm outside of Hanska, MN. He graduated from Hanska High School in 1943. He went into the Army in 1944 and served in the 31st infantry in the Phillipines in Leyte and Mindanao until 1946. He received the Combat Infantry Badge and Bronze Star for his service. John attended Gustavus Adolphus College from 1947-1951. He was married to Joan Belle Hughes on February 16, 1952. The couple was blessed with three children, John (Tammy) Helling, III, Jane (Henry) Cohn, and Jilene (Jon) Bjork. His loving wife Joan passed away on July 21, 2003 and Jane, his beautiful daughter, passed away on December 31, 2006. John is further survived by his five grandchildren, Jenny (Thomas) Fuller-Helling, Jamie (Justin) Gervais, Henry John (Kathrine) Cohn, Carter (Mandy) Cohn, Kelly (Cody) DeJardin; six great-grandchildren, Hunter, Lucas, Emelia Gervais, Olivia and Henry Cohn, and Cameron Fuller. John is fondly known as “Grandpa John” to Julie and Richard Valenzuela and their children, Angelo, Lorenzo, Jesenia and Antonio; as well as, Jennifer Stotesbery and Cristy Jensen, their children Edison and Eleanor; Shayla Goss with fiance’ John Melzarek, Shontal Goss and her boyfriend Aaron Tamm. John’s life included many accomplishments while working for Wilson Packing and Archer Daniels Midland in the mid- ‘50’s and 60’s. Working as the corporate credit manager in the turkey operation for Domain Industries from 1960-1978 and from 1979-1991 at Dynatronic’s in Amery. Completing his career as the founding partner and president at Amery Technical Products (1984-1999). He as proudly been involved with several organizations through the years which included, New Richmond Kiwanis, VFW Post #10818, American Legion Post #80, Northwest Credit Association, and the New Richmond Cemetery as a board member. John was a founding member of the Veterans Memorial and a long-time member of First Lutheran Church, serving as president of the Church council. He loved to spend his free time with all of his family and friends. John enjoyed time spent outside, golfing, fishing and pheasant hunting. His “happy” place was his cabin on Big Sissabagama Lake located outside of Stone Lake, WI. A visitation was held on Thursday, May 21, 2020 from 3-8 pm at Bakken-Young Funeral & Cremation Services (728 S Knowles Ave) all guests were required to wear their masks and practice CDC mitigation guidelines, which includes physical distancing. A PRIVATE Family Funeral was held on Friday, May 22, 2020 at 11:00 am at Bakken-Young and was live streamed via link see below. Interment was in the New Richmond Cemetery with military honors performed by the American Legion Post #80. Arrangements are with Bakken-Young Funeral & Cremation Services.