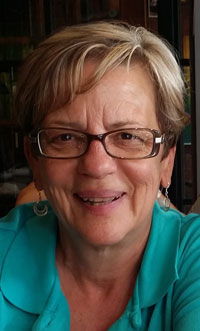 Joan E. Kremer, age 62, a long time resident of River Falls, WI, died Wednesday, October 8, 2014, at United Hospital in St. Paul, MN, as a result of a massive brain hemorrhage.  She passed quickly and peacefully surrounded by her family. Joan had such a love of life and the people, pets and nature that were part of her life, that all who met her felt her love and compassion. She was a writer and a published author, who never stopped exploring and learning new things.  She was a devoted mother, grandmother and pet owner.  Joan was also a spiritual person who always continued to explore and expand her spirituality. She will be remembered for her love of family, love of learning and love of traveling.  Her explorations included many vacation trips with family all across the country and abroad.  Joan was born on October 7, 1952, in Osakis, MN, to George and Lorraine (Holt) Kremer.  The family moved to River Falls, WI, when she was 5 years old.  Writing was in her genes as she worked with her Dad, the editor and publisher of the River Falls Journal, and branched out to work at the Eau Claire Leader Telegram, before returning to the Journal as a “Chip Off the Ol’ Block”.  She later used her writing skills to develop training programs for companies. She is survived by her spouse, Brenda Keller; son, Joshua (fiancé, Megan Schoenherr) Bennett; daughter, Erin (fiancé, Jason Heinrichs) Bennett; grandson, Silas Heinrichs; mother, Lorraine Kremer; siblings, Ann (Larry) Phelps, Mark Kremer, Paul Kremer, David (Pat) Kremer, Ruth (Randy) Pickering, Sara (Russ) Burmeister, Margaret (Steve) Brunn, Michael (Sheryl) Kremer; in-laws, Gary (Mary) Keller, Barbara Keller, Gregg (Toni) Keller; MANY nieces, nephews, relatives and friends. She was preceded in death by her father, George Kremer; and sister, Kathleen Kremer.  A Celebration of Joan’s Life was held at Juniors/Best Western (100 Spring St.) in River Falls on Saturday, October 18, 2014 beginning with Social hours/visitation from 1:00-3:00 pm followed by a service at 3:00 pm and concluding with social hour and hors d’oeuvres. Overflow parking will be available at Family Fresh Market for the service.  Arrangements are with Bakken-Young Funeral & Cremation Services of River Falls.