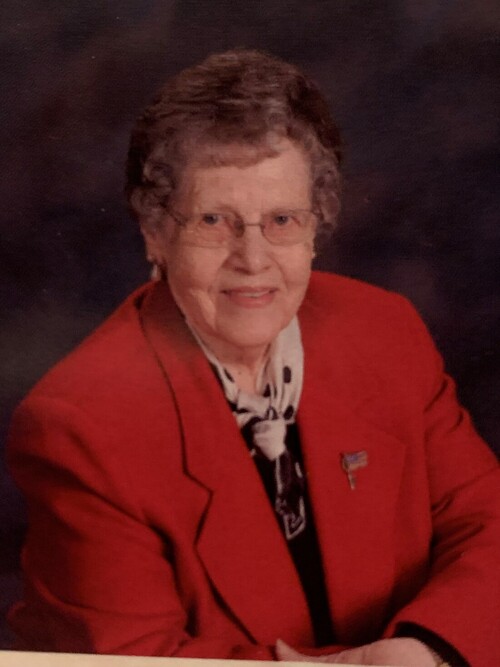 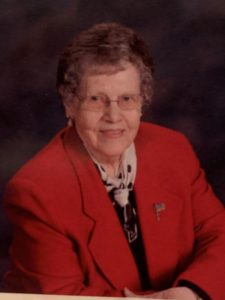 Jean Florence Behm, nee Frazier, age 98, of Hudson, WI, passed away Monday, February 28, 2022, at Comforts of Home in Hudson. Jean was born the daughter of Grover and Florence (Van Someren) Frazier on January 25, 1924, in Hudson. She was baptized and confirmed at the First Presbyterian Church in Hudson. Jean graduated from Hudson High School with the class of 1942. Jean was married to Myron Anderson. They were blessed with 3 children, Diane, Gary, and Deborah. Jean was an active member of the 1st Presbyterian Church for many years. She served as a Stephen Minister, a Deacon, Elder, Sunday School and Vacation Bible School teacher. Myron passed away in 1967. At that time, she moved closer to her mom who was a great source of strength and support for her. On August 7, 1971, Jean married Arthur Behm. In 1997 Jean joined Trinity Lutheran Church where she continued to be an active member most notably calling church members to wish them birthday greetings, which she did for many years. Jean was a woman of Faith, always reading her Bible and devotions, which was a source of strength for her family. She also was a member of Trinity Quilters. Jean was also active in the Hudson community, volunteering at Day Away, a respite care ministry that allowed caregivers a much-needed day off. She spent many Mondays’ gathering fresh vegetables, fruit and bread and delivering it to members of the community that were in need or couldn’t get out to shop. Jean enjoyed traveling and went on many bus trips with Art or her daughters. Art died in 1995. She was truly a selfless woman always putting others before her own. She was a strong woman who persevered in difficult times. She is preceded in death by her parents, Grover and Florence Frazier; husbands, Myron Anderson and Arthur Behm; and sisters, Evelyn Serier, Lorraine Steel, Barbara Gillis. Jean is survived by her children, Diane (Curtis) Grenier of Perham, Mn, Gary (Cindy) Anderson of Hastings, Mn, Deborah (Fred) Harwell of Roberts, WI; grandchildren, Christopher (Melissa) Grenier, Jon (Cari) Grenier, Jason (Bridget) Grenier, Bill (Kelly) Anderson, Jamie (Sarah) Anderson, Amy (Kyle) Larson, Danielle (Dale) Peterson, Jennifer (Aaron) Ruhde, Joseph Harwell; great-grandchildren, Caden Grenier, Emma Grenier, Dallas (Carrie) Ehrmantraut, Colter (Shawnda) Erhrmantraut, Jaden Ehrmantraut, Mardi Ehrmantraut Carson Grenier, Hunter Anderson, Jacob Anderson, Simon Anderson, Thatcher Anderson, Hannah Peterson, Joey Cook, Charlotte Ruhde; great-great-grandchildren, Collins Ehrmantraut, Emberlyn Ehrmantraut, Riverlee Ehrmantraut; brothers-in-law, Russ Serier, James Steel, Don Gillis; and many other relatives and friends. A Celebration of Jean’s Life was held on Saturday, June 4, 2022, at 11AM at Trinity Lutheran Church West Campus 1206 6th Street, Hudson, WI. Visitation was also on Saturday, June 4, 2022, from 10-11AM at the church. Interment was in Willow River Cemetery in Hudson. In lieu of flowers, memorials are preferred to Trinity Lutheran Church/Quilting. Arrangements are with Bakken-Young Funeral & Cremation Services.