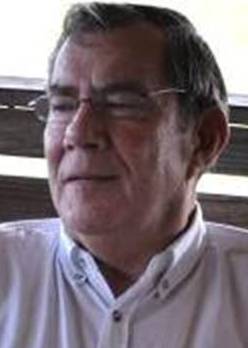 James A. “Jim” Ohlfs age 70 of New Richmond passed away Sunday, January 6, 2013 at Westfield’s Hospital.  He was born the son of Albert and Elizabeth (Forster) Ohlfs on August 31, 1942 in Ladysmith, WI.  He served his country in the U.S. Navy and after his military service he married his high school sweetheart, Mary Kaye Amundson on October 1, 1966 in New Richmond.  He enjoyed a career in the Customer Service department at Doboy.  He also worked as a master cabinet maker, and as a custodian for the New Richmond School District.  Jim was very involved in Boy Scouts and the New Richmond High School Band program.  For many years, he served on the board of directors at the New Richmond Community Child Care Center.   He was a member of the New Richmond United Methodist Church and an avid Green Bay Packer Fan.  He spent many hours on his John Deere Tractor and loved camping and woodworking.  He is preceded in death by his parents; sisters, Patricia “Pat” Leavens, Virginia “Gini” Rutledge; and niece, Diane “DeDe” Leavens.  Jim is survived by his loving wife of 46 years, Mary Kaye; sons, Greg (Wendy Trice) Ohlfs, Kevin (Cat) Ohlfs; grandchildren, Kristen, Rebecca, Kaitlyn, Zackary; brother, Richard Ohlfs; numerous nieces, nephews, relatives and friends.  A memorial service was held Friday, January 11, 2013 at 11:00 am at the New Richmond United Methodist Church.  Visitation was Thursday, January 10, 2013 from 4-7 pm at Bakken-Young Beebe Chapel in New Richmond and Friday from 10-11 am at church.  Interment was in the New Richmond Cemetery with the American Legion Post #80 of New Richmond providing honors.  Arrangements were with Bakken-Young Funeral & Cremation Services Beebe Chapel of New Richmond.