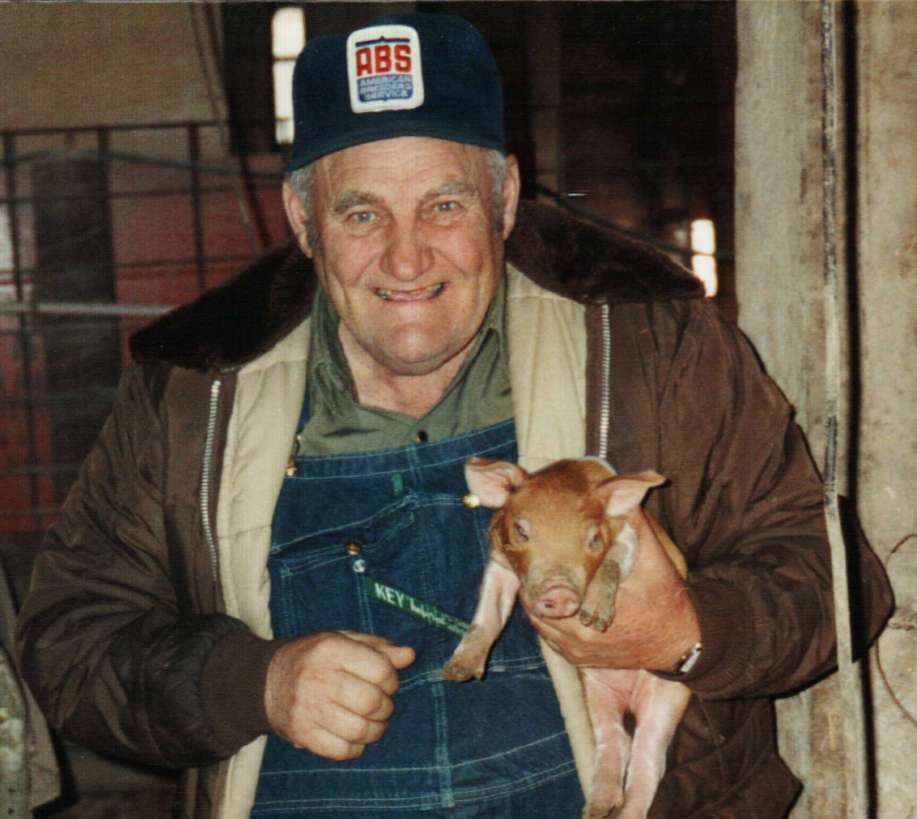 James H. Lubich, age 89 of River Falls, was called home to his final resting place on Tuesday, June 4, 2013 at Kinnic Long Term Care.  Jim was born on April 5, 1924 on the family farm in Kinnickinnic township, the sixth child of Bill and Augusta Lubich.  Jim spent almost his entire life on the family farm, first farming with his father, Bill and grandfather, Frank. After the death of his father in 1946 Jim farmed with his brother, Bill after Bill returned from the war.  In the 1970’s his son, Paul, joined the operation.  In the 1990’s his grandson, Kevin became the fifth generation of Lubich’s to work the land.
On June 5, 1946 Jim married Helen Oleskow, a fresh faced Ukrainian girl from Weherhaeuser, WI who came to River Falls to attend college.  Children were soon to follow, Mary Katherine in 1947, Diana Anastasia in 1950, Rebecca Michael in 1955 and Paul James in 1956.
As the farm economy improved in the 1950’s so did the family farm; a new state-of-the-art barn was built equipped with electricity, a Surge milking system and a barn cleaner.  Jim and Helen also built a new house with running water. When his son, Paul, married Sandy Liddle, Jim and Helen built a retirement home down the road on the farm, where Jim lived until he could no longer live on his own and moved to Our House Assisted Living in River Falls at the age of 87.
Jim was a life-time member the River Falls Moose lodge where he could be found playing euchre on Wednesday nights.  He was on a bowling league and a pool league for many years.  He attended St. Bridget Catholic Church and sat on the Kinnickinnic Town Board and St. Croix County Board. He and Helen enjoyed hosting many parties with friends.  He took playing euchre very seriously and could count cards and therefore, was quick to point out if someone didn’t follow suit.  In his later years he loved watching wildlife outside his window especially the birds that would come to his feeders.  He seemed to sense when deer would come down the hill and into his back yard or when a flock of wild turkeys would cross his driveway.  At Our House Assisted Living he made sure that his daughter, Diana, kept shell corn and cob corn in the feeders outside his window so that the deer would come by.  When he had to move to the Kinnic Home in January of 2013, he had up to five deer coming to eat every night in addition to squirrels, birds and a possum.
Jim is preceded in death by his parents, William and Augusta Lubich; wife, Helen Lubich; infant son, Joseph Lubich; sisters, Marie Schrank, Ethel Kusilek; brothers, Hartland Lubich, Ed Lubich, Bill Lubich, and Frank Lubich; as well as a dear friend Shirley Sitz.
Jim is survived by his children, Mary Ross, Hudson, WI, Diana (Robert) Oleskow-Lubich, Lake City, MN, Rebecca Lubich Monson, River Falls, WI and Paul (Sandy) Lubich, River Falls, WI;  seven grandchildren, Katherine (David Tull) Ross, White Rock, BC, Canada, Bethany (Drew) Peterson, Denver, CO, Stacey Monson LaParre, Hudson, WI, James (Laura) Monson, Roberts, WI, Jesston Monson, River Falls, WI, Missy (Keith) Van Landuyt, Middleton, WI, Kevin (Jessica) Lubich, Roberts, WI; five great-grandchildren, True Monson, Cade LaParre, Theodore “Teddy” Peterson, Helen “Hattie” Van Landuyt and Lily Lubich; siblings, Roman (Ursula) Lubich, Roberts, WI, Vicky (Larry) Schorn, River Falls, Wl and sister-in-law, Mrs. Hartland (Rhoda) Lubich, River Falls, WI.