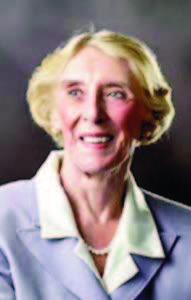 Tini Gill-Soderberg of New Richmond, Wisconsin, passed away on January 16, 2017 at the Deerfield Nursing home.  Tini was born on April 28, 1930, to Pierre and Antoinette Geelen in Maastricht, Holland.  She emigrated to America after World War II to Vanderbilt University in Nashville, Tennessee, where she met and married John Gill the father of her three children, Antoinette (husband Ron), John (wife Lauren) and Clifton (wife Holly).  John and Tini settled into the Chicago suburbs for most of their teaching careers. Tini graduated from Elmhurst College in 1964, and she started teaching at Fenton High School in Bensenville, Illinois.  To further her education, she earned a Master’s Degree in Secondary Education from Northern Illinois University in 1972. She taught at Fenton for 25 years until her retirement.  After her first husband, John, died in 1988, she continued to teach at Elmhurst College.  Tini met her second husband, John Soderberg, in Hayward, Wisconsin. They have been happily married for 21 years, and have enjoyed their life in New Richmond, Wis., and at their cherished cabin on Lac Courtes Oreilles near Hayward, Wisconsin.  Survivors include her husband John and his children and grandchildren, her children, her eight grandchildren and her three great-grandchildren. She is also survived by one sister, Yesse Garrett, and one brother, Pierre Geelen.  Tini was an incredible woman. She was superbly intelligent, Hollywood gorgeous, and extremely passionate about all aspects of her life. She instilled in her children a love of knowledge, a quest to explore the world, and a vivacious joy for life. Although her children imitated her Dutch accent unmercifully, she still loved them with all her heart and fought fiercely for them when they needed it.  But Tini was a study in contrasts-she loved Edith Piaf and Willie Nelson. She loved to shop, but she didn’t like to spend money. She exercised like a maniac and relaxed very nicely with a glass of Chardonnay.  Her charisma laid in the reality that no one was quite sure exactly what she was going to do or say next!!!!! For this, all her friends and family will miss her and remember how much fun she was.  Finally, her family would like to thank the staff at the Deerfield for their unwavering care of Tini in her final days.  Tini felt loved and safe at the Deerfield. Thank you.  A private memorial service will be held on a later date.  In lieu of flowers, memorials are preferred to The Deerfield Presbyterian Home in New Richmond or the Alzheimer’s Association.  Cremation arrangements are with Bakken-Young Funeral & Cremation Services Beebe Chapel of New Richmond.