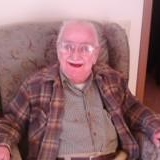 Harold C. Heisa age 89 of Hudson died Tuesday, August 11, 2015 at Lakeview Hospital in Stillwater, MN.  He was born the son of Frank and Frieda Heisa on November 26, 1925 in Red Cedar Township, WI.  Harold farmed for many years in the Menomonie area.  He moved to Hudson and worked at United Refrigeration until his retirement.  Harold had a great sense of humor and was a Vikings fan.  He always said, “I have no regrets, if I didn’t do it, it was my own fault.”  He is preceded in death by his parents, Frank and Frieda; brother, Gordon; and companion for 25 years, Irene McCaustland.  Harold is survived by his friends, Patricia Phillips and Gary (Connie) Johnston.  A memorial service was held Friday, August 14, 2015 at 1 pm at Bakken-Young Funeral Home in Hudson.  Visitation was also Friday from 12-1 pm at the funeral home.  Interment was in Peace Lutheran Cemetery in Menomonie, WI.  Arrangements are with Bakken-Young Funeral & Cremation Services of Hudson.