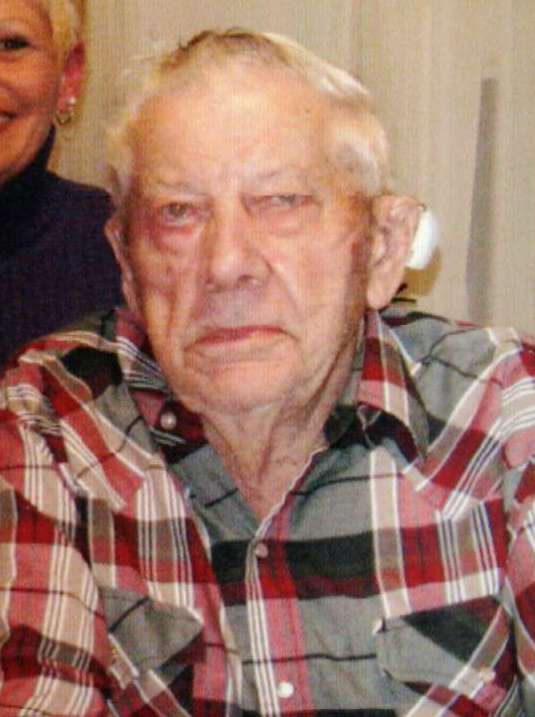 Gordon W. Knott, born October 3, 1918 in rural Hudson, passed away on August 23, 2013 at his home surrounded by his family.  Gordon was born on the family farm in the house his grandfather built, to Nickolas and Matilda (Schwitzer) Knott.  He attended a one-room school on County Road N for most of his education.  During this time he farmed with his mother and brother, neighbors, and hired help.  He later took classes on welding and electrical work at the River Falls Normal School.  He followed conservation practices as he cared for the land and his animals throughout his life.  On May 27, 1945, he married Marie Knefelkamp Denninger.  To this union was born a son and two daughters.  He cherished his time thinking in his shop creating some of the first self-unloading wagons and various other tools to make farming easier.  He was always willing to help neighbors with repairs.  He made sure his farm equipment was in good running condition.  His good math and carpenter skills lead him to remodel his barn in the 1940’s and his house in the 1960’s.  He was great help to the kids whenever they took on projects.  In between times he fashioned picture frames, clocks, and treasured rocking horses from the wood harvested from his wood lot.  Gordon was a good husband and father creating happy memories for his family and friends.  He enjoyed hunting, fishing, traveling, playing cards and other games.  He loved to have people stop.  He was preceded in death by his father; mother; brothers, Harry and Albert; sisters, Edna and Baby Knott; his son, Alvin Denninger; grandson, Larry Persells; and nephew, David Knott.  He is survived by his wife of 68 years, Marie; son, Jerry (Melanie) Knott; daughters, Gloria Knott; Judith (Jim) Hansen Jorgenson and Mary (Dwaine) Persells; many grandchildren; great grandchildren; great great-grandchildren; sister-in-law, Bess Knott; niece, Kathy Knott; great nephews, Kevin Knott,  Kory (Shauna) Knott and great great-niece and nephew, Zoe and Garrett Knott.  A memorial visitation was held Tuesday, August 27, 2013 from 3-8 pm at Teens For Christ (538 Old Highway 35, Hudson) with a memorial service at 6:30 pm.  Private interment was in the German Settlement Cemetery in Troy Township.  Arrangements are with Bakken-Young Funeral & Cremation Services of River Falls.