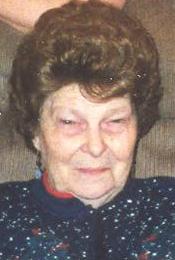 Gladys Hope Murray, 88, of New Richmond, WI, formerly of Duluth, died Saturday, December 29, 2012 in New Richmond, WI at the home of her daughter, Lynn.  Gladys was born in Duluth on July 25, 1924 to Laura (Larson) and Jens P. Hansen.  She grew up on a farm in southern Minnesota and graduated from Garden City High School.  She later moved north to Duluth and worked several jobs including Northshore Manufacturing and General Electric. It was during this time that she met her future husband.  She married Chester L. Murray September 15, 1950 and celebrated many years of happiness until his death on August 30. 1987.  She was preceded in death by her husband; parents; brother, Dallas; and sisters Doris and Joy.  Gladys is survived by her daughters, Lynn (Ed Tousley) Johnson of New Richmond, WI; and Robin (Knute) Graves of Oliver, WI; brother, Keith of Cloquet, MN; grandsons, Rusty (Sara) and Cody (Leiha); and great grandchildren, Alex, Kenny, and Stevie and one more, due in January, 2013; and many nieces and nephews.  Visitation: 12 Noon until the 1 p.m. Memorial Service was on Thursday, January 3, 2013 in Bell Brothers Funeral Home, 601 N 56th Ave W, in Duluth.  Cremation provided by Bakken-Young Funeral & Cremation Services Beebe Chapel of New Richmond.