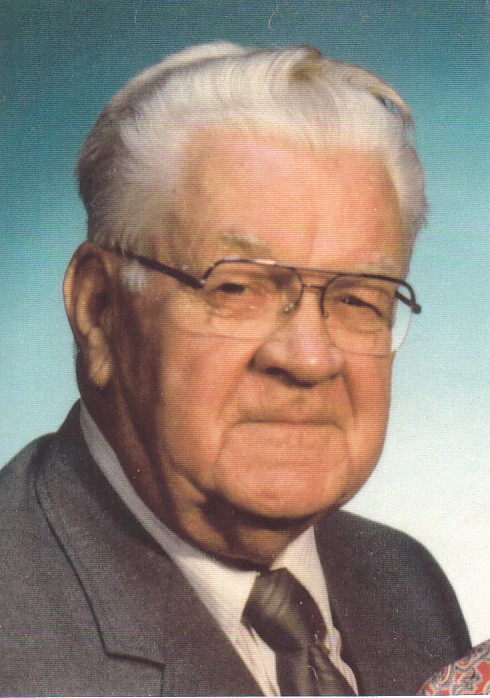 Frank O. Swanson, age 96 of River Falls died on Thursday, December 16, 2010 at Regions Hospital in St. Paul, Minnesota.  Frank was born the son of Oscar and Ida (Anderson) Swanson on April 17, 1914 in Osceola, Wisconsin.  He graduated from Hawkins High School with the class of 1932.  After high school, he farmed and worked in the Sash and Door Factory in Hawkins until saving enough to attend River Falls Teachers College.  He graduated from River Falls with the class of 1941.  He served in the Army as a First Sergeant from 1941 to 1945.  Frank married Marie Ensign on November 27, 1941 in River Falls.  After the service, Frank taught at the River Falls High School briefly before joining the Lindquist Hatchery.  He eventually went to work for Equity Co-op, where he remained until retiring.  In his retirement, he worked for the city of River Falls and UWRF repairing parking meters.  Frank was a member of Ezekiel Lutheran Church, River Falls Masonic Lodge, St. Croix Valley Shrine, River Falls American Legion, and the River Falls Volunteer Fire Department.  He served in many capacities in each of these organizations through the years.  Frank enjoyed his family, his church, and his community.  He wrote poetry.  He was a kind, loyal man with a good sense of humor.  Frank is preceded in death by his parents, Oscar and Ida Swanson; brother, Arvin Swanson; wife, Marie Swanson; and sister, Violet Engebreth.  He is survived by his children, Sherri (Gary) Brown of Harvard, MA and Larry (Mary) Swanson of Athens, WI; granddaughter, Tegan Brown of Los Angeles, CA; and many nieces, nephews, relatives and friends.  A Funeral Service was held on Tuesday, December 21, 2010 at 11 am at Ezekiel Lutheran Church in River Falls.  Visitation was Monday, December 20, 2010 from 4-8 pm with a Masonic Service at 7:30 pm at the Bakken-Young Funeral Home in River Falls and on Tuesday from 10-11 am at the church.  Interment was in Greenwood Cemetery.  In Lieu of flowers, memorials may be directed to the Shriner’s Hospital, Lutheran Social Services or a Veteran’s organization of their choice.  Arrangements were with Bakken-Young Funeral & Cremation Services of River Falls.