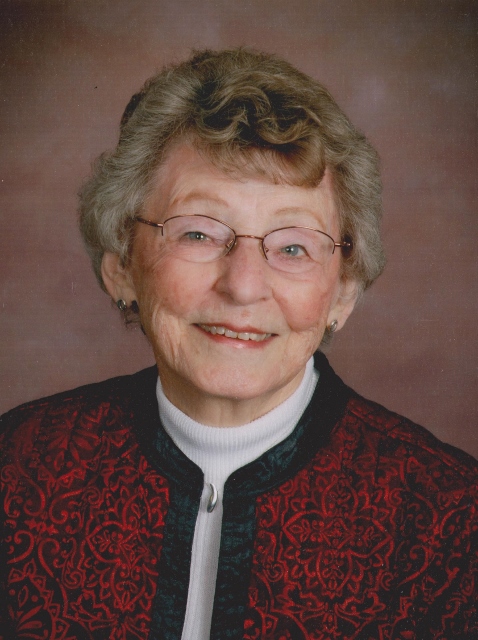 Fay Vivian (Hartwig) Reppe, age 95 of New Richmond, WI, went home to be with her Lord on June 7, 2015 surrounded by her loving family.

Fay was born November 1, 1919, in Porter, Minnesota.  Her parents farmed in the Canby area until 1925 when they moved to a farm in Milltown, Wisconsin.  In the early 30s her family sold the farm and moved to Milltown where she graduated from high school in 1937.  In the very early 40s,  Fay was hired as a maid for the McNally family in New Richmond.  While here she met a local young man named Donald Reppe who was home on furlough from the service.  They dated for a short time while Don was in the Army Air Corps and was stationed in Wichita Falls, Texas, at Sheppard Field.  As legend has recorded, he mailed a brief and precise marriage proposal letter to Fay while he was at Sheppard Field.  She soon boarded a train in New Richmond along with Don’s sister Mona and off to Texas they went. Don and Fay were married December 6, 1942.  They returned to New Richmond after the war with their first-born child, Spencer.  Here, Don found employment at Doughboy Industries and over the next ten years three more children were born; Ann, James and Mary Ellen.  Their marriage flourished for sixty-six years.

Besides being a full-time homemaker, Fay kept involved in many other activities.  She was involved in volunteering at First Lutheran Church where she served her Lord and Savior Jesus Christ and put in countless hours doing everything from working in the kitchen, to Ladies Aid, to quilting, to leading Bible study, to teaching Sunday School, and even serving on the Church Council at a time when it was predominantly men.  Fay was also involved in numerous other community volunteer events.  Fay had a kind heart and put her trust in Jesus and lived her life in a Christian manner.

When Fay was not volunteering, she enjoyed time with her husband, Donald.  Their forty-plus  years of retirement were spent traveling both near and far, golfing, reading, and pursuing numerous domestic hobbies such as sewing, knitting and crocheting.  They also enjoyed time with their expanding family.

A special thank-you to everyone at The Waters of Oakdale who played a huge part in our mother’s physical and emotional comfort these past several months.

A celebration of Fay’s life was held on Thursday, June 11, 2015 at 11 am at First Lutheran Church  218 County Road K New Richmond, WI.  Visitation was also Thursday from 10-11 am at the church.  Interment was in the New Richmond Cemetery.

In lieu of flowers, memorials may be directed to the American Cancer Society.