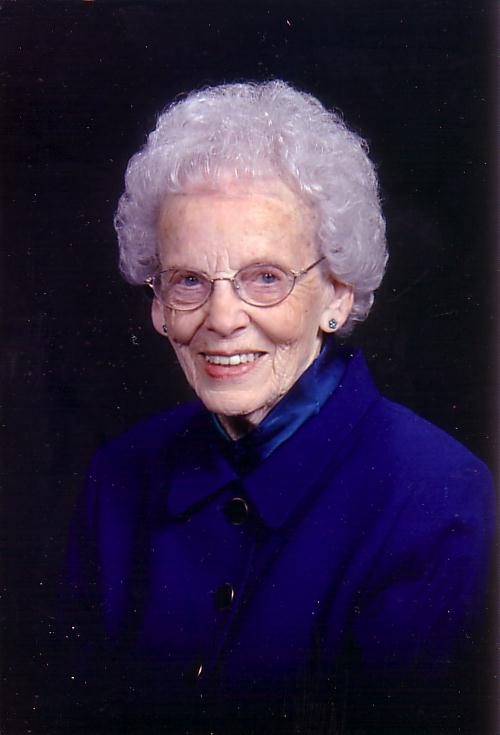 Fay Myrtle Nordin was born July 27, 1911 to George and Myrtle Lewis in the Township of Rusk, Burnett County, Wisconsin.  She received her elementary education at the Green Grove rural school and her high school education at the Shell Lake High School. She graduated valedictorian of her class.  She attended the Eau Claire State Teacher’s College where she earned her Wisconsin Teacher’s Certificate. She later upgraded her education at the Superior and River Falls Teacher’s Colleges.  She spent fifteen years in the teaching profession, and in later life she spent thirteen years as secretary to the Administrator of the Siren School System.  Fay married Carl Nordin, the future Siren post master in Siren on February 16, 1946. To this union, two children, Carleen and Susan, were born. Fay spent the major part of her life in the Siren community.  However in 1991 she and her husband moved from Siren to New Richmond, Wisconsin to be closer to their children. She and Carl were faithful members of Bethany Lutheran Church in Siren and then First Lutheran Church in New Richmond. Fay taught Sunday school and was Vacation Bible School leader for many years.  She was active in the former Women’s Missionary Society, in the Lutheran Church Women’s Organization, and a member of The American Legion Auxiliary Lund-Brown Post # 132 for 64 years.  Fay’s life revolved around her family, friends, church, and community. Her hobbies included sewing, gardening, knitting, crocheting, and reading.  She and Carl shared a love of camping, walking, playing cards and traveling.  She was preceded in death by her husband Carl, her parents, two sisters Ardys Forseth and Theone Doner, and three brothers Leon, Lloyd and Keith Lewis.  She will be sadly missed by her daughter Carleen Tjader and son-in-law Mike, her daughter Susan Allan,  four grandchildren; Michele Tjader (Tom Wilmouth),  Melissa Tjader, Mark Tjader, and Sarah Allan; three great-grandchildren; Zachary Corbo, Lilly Allan, and Micah Tjader.  She will also be missed by Carl’s family; brothers Ken (Elaine) Nordin, Glenn (Mary) Nordin; sisters Ann Smith, Luella Monson, Esther Conroy, Hazel Keppen, and Betty Anderson. She is also survived by many nieces and nephews.  Fay was the kindest, gentlest and most gracious of ladies!  A Funeral Service was held on Thursday, December 1, 2011 at 11 am at First Lutheran Church in New Richmond.  Visitation was also on Thursday from 9:30-11 am at the church.  Interment was in Lakeview Cemetery in Siren, WI.  In Lieu of flowers, memorials may be directed to ELCA World Hunger C/O First Lutheran Church.  Arrangements are with Bakken-Young Funeral & Cremation Services Beebe Chapel of New Richmond.