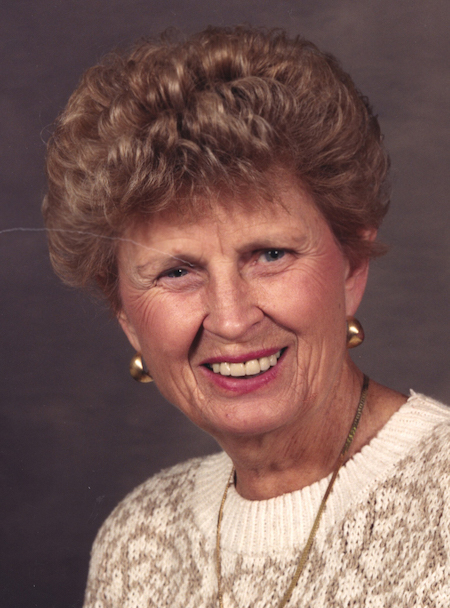 Elsie Mae Johnson (nee Shafer), a former English teacher in the high school at Buffalo, MN died on Friday, June 19, 2015 at the Southview Acres Nursing Home in West St. Paul, MN, where she had resided for the past 8 years.  She had been a resident of Buffalo since 1940 when she married Dean Johnson, who also taught at Buffalo High School.  In 1995, they moved to Woodbury to be closer to their two sons and families.

During her 30 years of teaching, Elsie touched the lives of thousands of students.  She was active in the Presbyterian Church in Buffalo serving as an Elder, a Deacon, and was an officer of the Ladies Guild and the Missionary Society.

Elsie was born in North Andover, WI on November 3, 1915, to John and Lulu Shafer.  She graduated from high school in Red Wing, MN where she ranked third in her class of 144.  In 1935, she enrolled in River Falls State Teacher’s College where she received a BA degree in 1940.  She taught in Buffalo from 1943 to 1946 as a long-term substitute during World War II.  In 1957 she resumed teaching in Buffalo as an English teacher for 7th, 8th, and 9th grade students.  She continued her education at the University of Minnesota toward a Master’s Degree.

She and her husband, Dean, lived in Buffalo together for 55 years where they raised their family, were active in the community, and developed many close friendships.  Elsie was a member of the Buffalo Women’s Club and the League of Women Voters.  She served on the Board of Directors for the Buffalo Library and the Lakeview Retirement Center.

Throughout their lives – especially after retirement – Elsie and Dean enjoyed traveling in their Airstream trailer with their many friends.  There was much travel within Minnesota, to the mountains and parks in the western United States and Canada, and south to Arizona and Florida for winters.  A special place was their lake home north of New Richmond, WI, where they spent many fun times with family.

In 2000, after Dean had passed away, Elsie realized a dream and became a member of Guardian Angels Catholic Church in Oakdale.  Along with her special friend, Frank Presley, she was an active member of the parish attending Saturday mass and as a member of the Retreads Club.

Funeral services were held at Guardian Angels Catholic Church at 10:30 AM, June 25, 2015, presided by Father Rodger Bauman.  The service was preceded at 9:30 AM by visitation and followed by lunch at 11:30 AM at the church.  Her ashes were committed at Greenwood Cemetery in River Falls, WI, following at 1:30 PM.