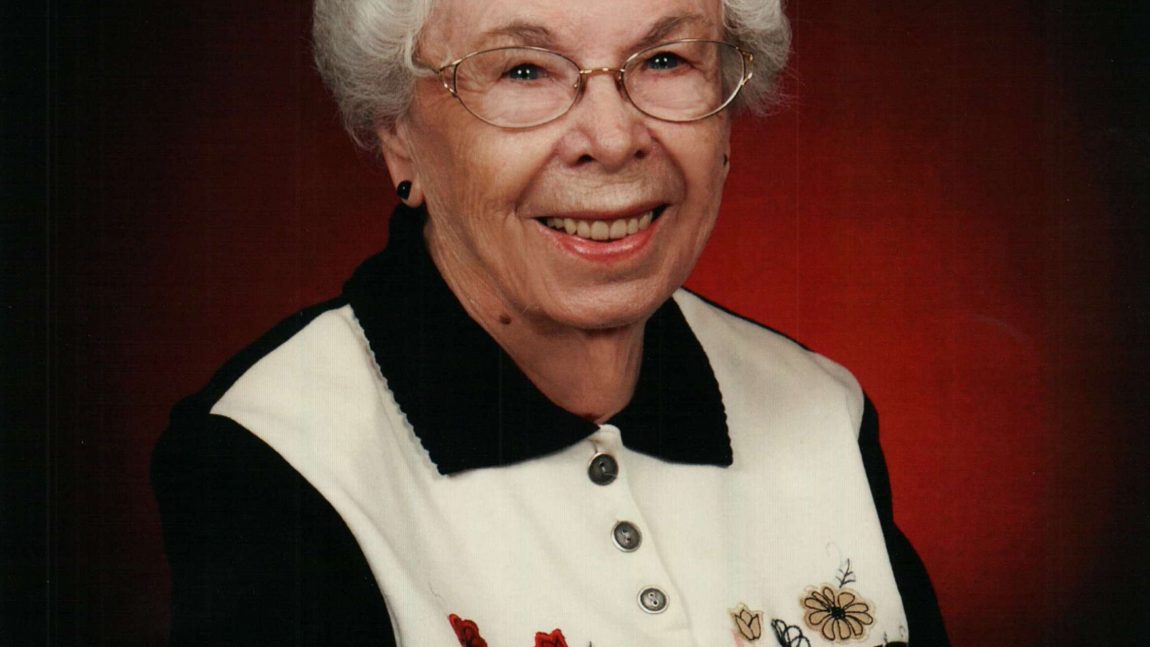 Eileen Viola Anderson, age 101 of Hammond, passed away on August 9, 2012 at the Christian Community Home in Hudson.  She was born June 2, 1911, the daughter of Alvin and Leva Finstad in Nora, South Dakota.  She spent her early years in Nora and in 1921 her family moved to Gilman where she attended Gilman Center School for two years.  In 1923, she moved to Spring Valley and graduated from Spring Valley High School with the class of 1930.  That fall, Eileen entered River Falls State Teachers College, graduating in 1932 with a degree in Primary Education.  She taught Kindergarten for three years in her home town of Spring Valley.  On June 16, 1936, she was married to Carl Neitzke at her parents’ home in Spring Valley.  This union was blessed with two sons, Richard and Robert and two daughters, Mary and Jane.  They lived in several Wisconsin cities and in 1959 the family (Carl, Eileen, Mary and Jane) moved to Naperville, Illinois.  Eileen and her family were active in their community and church.  After the death of her husband Carl in 1961, she worked as a dental assistant for Dr. Bill Kopperud.  In 1964 Eileen was united in marriage to Elwood Anderson from Hammond, and made this her home town ever since.  She moved from her home to the Heritage Court Apartments where she lived until August of 2010 when she moved into the care center, and eventually to the Christian Community Home in Hudson.  She had made many friends with residents in the apartments as well as those in the care center.  In her earlier years she was active in Gethsemane Lutheran Church until her health began to fail.  She is preceded in death by her husbands, Carl Neitzke and Elwood Anderson; parents, Alvin and Leva Finstad; and sister, Norma Lokken.  Eileen is survived by her sons, Richard (Bette) Neitzke of Minnetonka, MN and Robert (Barbara) Neitzke of Punta Gorda, FL; daughters, Mary (Paul) Kuchar of Decatur, IL and Jane (Douglas) Prince of Naperville, IL; step-children, Jerome Anderson of Boston, MA, Terence (Mary Helen) Anderson of Greendale, WI, and Mike (Cecilia) Anderson of Evanston, IL; grandchildren, Barbara (Steve) Auer of Dayton, MN, Craig (Jill) Rose of Mound, MN, Amy (Brian) Cleary of Decatur, IL, Sean (Erika) Neitzke of Montgomery, AL,  Douglas (Brittany) Prince of Naperville, IL, Barbara Prince of Naperville, IL, Andrew Prince of Naperville, IL, Brooks Neitzke of Irving, TX, James (Stephany) McFadzean of Denver, CO; and many great-grandchildren.  A Memorial Service was held on Saturday, October 13, 2012 at 11 am at Gethsemane Lutheran Church in Baldwin.  Visitation was also Saturday, October 13, 2012 from 10-11 am at the church.  Interment was in St. Mary’s Cemetery in Hammond.  Memorials may be designated to the Baldwin Food Shelf or Gethsemane Lutheran Church.  Arrangements are with Bakken-Young Funeral & Cremation Services of Baldwin.