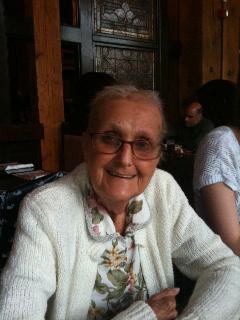 Diana C. Steffan, age 80 of River Falls, Wisconsin and formerly of Harlingen, Texas, died on Sunday, March 13, 2011 at her home.  Diana was born on February 13, 1931 the daughter of Tommy and Katie Soard in Detroit, Michigan.  She attended school in Detroit through 11th grade.  In February of 1951, she married Neil Patrick Soward.  Diana was a foster parent to a number of children and worked as a telephone operator for Bell Telephone Company while living in Michigan.  She later worked as a production scheduler for CTS Corporation in Brownsville, Texas.  In November of 1970, Diana married Edward Steffan.  She was a strong, courageous woman who was never willing to give up.  She had a good sense of humor, and was a loving mother and grandmother.  Diana enjoyed playing golf and bridge, and doing embroidery.  She is preceded in death by her parents, Thomas and Katherine Soard; both husbands, Neil Patrick Soward and Edward Steffan; and granddaughter, Angel Soward.  She is survived by her children, David (Joni) Soward of River Falls, Wisconsin and Janice (Aurelio) Moll of San Jose, California; grandchildren, Katherine, Nicholas, Thomas, Michael, and Martha Soward, Brittnay (Luis) Mercado, and Andrew Moll; brother, John (Herbie) Soard of Lapeer, Michigan; and many nieces, nephews, relatives and friends.  A Memorial Mass of Christian Burial was held on Thursday, March 17, 2011 at 11 am at St. Bridget’s Church in River Falls, Wisconsin.  Visitation was Thursday from 10-11 am at the church.  Interment was in the Greenwood Cemetery in River Falls.  Memorials may be directed to Adoray Hospice.  Arrangements are with Bakken-Young Funeral & Cremation Services of River Falls.