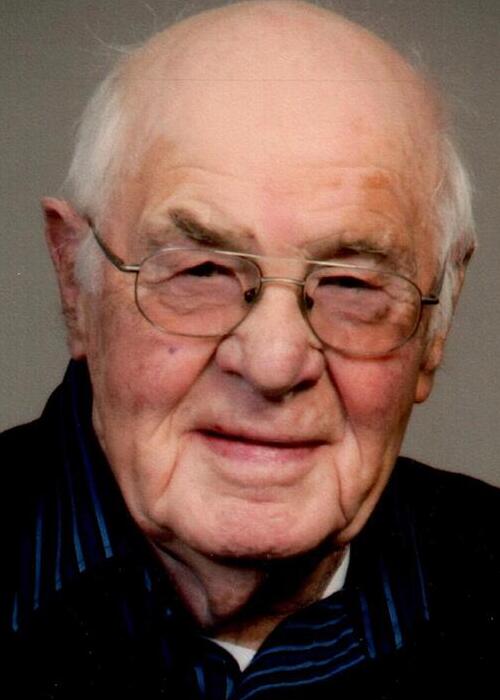 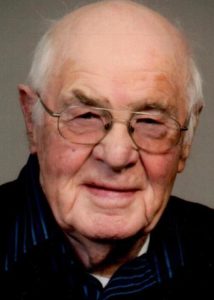 David Charles Ray, age 91, formerly of New Richmond, passed away at his home in Hudson on October 24, 2019. David was born on March 30, 1928, to Harry and Elizabeth Ray of Warren Township. He graduated from Roberts High School. On October 27, 1948, David married Donna Lewis at the Roberts Congregational Church, where they have remained faithful members. David served on virtually every church board at some point in his life, as had his father before him. He also followed suit in farm cooperative service, with decades on the boards of the Burkhardt Co-op and Farmers Union Co-op.  David revered his parents and was proud to carry on their legacy of church, community service, family, and farming. David and Donna raised their five children in the very farmhouse where he was born.
In retirement, David replaced Holstein cows with a few donkeys, which satisfied his dual needs for animals and entertainment. (A fun-loving man with a donkey was in surprising demand for special events, and he always had a good story to tell.)  Even the donkeys had to go when David and Donna moved to New Richmond in 2010, but he found other activities and appreciated good friends. Recently David and Donna moved to Woodland Hill in Hudson. David’s family is grateful to the staff of Woodland Hills and Lakeview Hospice for their care and compassion in David’s final days.
David was preceded in death by his parents; brothers, Richard and Darrell; and sister, Barbara. He is survived by Donna, his wife of almost 71 years; children Linda (Dean) Henderson of Hudson; Norma (Wayne) Revels of River Falls; Rodney (Tammy) Ray of Clear Lake; Roger (Laurene) Ray of New Richmond; Brenda Poulin of Hudson; 11 grandchildren; and 11 great-grandchildren.
A Memorial Service was held Wednesday, October 30, 2019 at 11:00am at Roberts Congregational United Church of Christ (1001 Birch Drive) in Roberts, WI. Visitation was Tuesday, October 29 from 4:00-7:00pm at Bakken-Young Funeral & Cremation Services (728 S. Knowles Ave) in New Richmond and one hour prior to the service at the church. Interment will be in Warren Cemetery at a later date.  Memorials may be designated to Roberts UCC. Arrangements are with Bakken-Young Funeral & Cremation Services.