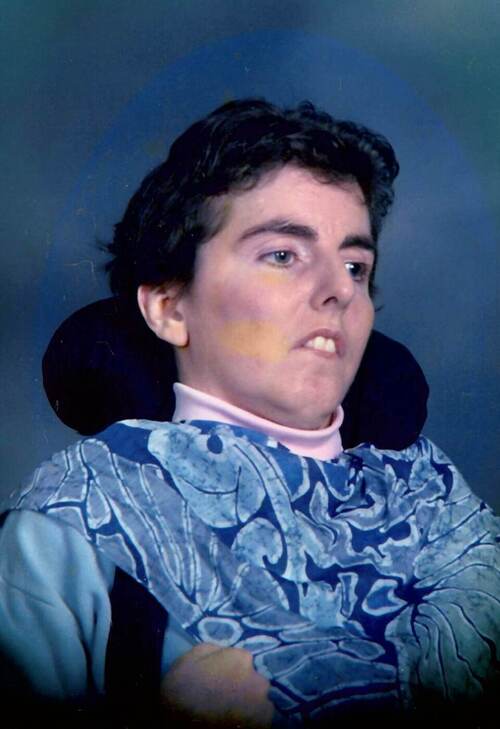 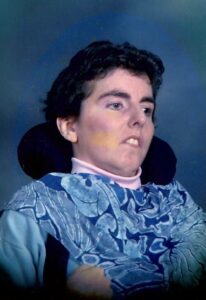 Dana Lynne Craig left this world to be with her Creator on Saturday, August 27, 2022. She passed away at Westfields Hospital, in the loving care of the staff and her family. Dana was born on January 11, 1965, at Holy Family Hospital in New Richmond, WI, the daughter of Dr. James L. Craig and Carolyn A. Craig. She is survived by her mother, Carolyn; her brother, Paul, wife Kimberly and daughter Michelle; her Aunt Lois Droes, and cousins Christopher, Dawn and Cheryl Droes; her Uncle Mackey Adams, and cousins Brian and Amy Adams. She is also survived by her former husband, Kenneth Gendrich.

On a beautiful fall day, October 6, 1989, Dana’s life changed forever in a single car accident in the Colorado Mountains. She was on her way to Steamboat Springs, CO, just getting up to speed outside the little town of Silverthorne, when for some strange reason, her car jerked quickly toward the right side of the road. She corrected, and her car jerked again toward the left lane. Another correction took her back to the right side of the road, where a little branch on a young aspen tree brought the roof of her car down on her head – causing the closed head injury which left her severely impaired.

Dana’s pre-accident days were filled with fun and achievements. She graduated from the New Richmond High School in 1983, as class co-valedictorian. Many activities centered on band, where she played a clarinet. In parades, she served as Rifle Squad captain, designing routines to accompany the music. She thrived on new challenges, and learning to play a baritone sax for Jazz Band was one of them (The instrument was almost as big as she was). Other activities: high school theater – “West Side Story”; Pom-Pon Squad Captain; Badger Girl’s State; and 4H Club, serving as St. Croix Co. 4H Queen & modeling an outfit she made at the Wisconsin State Fair. A fun, part time job was working at Dueber’s Fabric Store, often creating samples for display at the shop.

After high school, Dana attended the University of Wisconsin-Madison, where she enjoyed playing clarinet in the UW Band. She graduated with a degree in Chemical Engineering in 1988, having served two full semester internships at 3M Corporation in St. Paul. Newly married, she lived in suburban Denver, Colorado, where she worked for Bandgap Corporation. She was planning to pursue graduate studies in Biomedical Engineering.

It has been almost 33 years since Dana’s accident. From super achiever to super survivor, she could hear – and understand – and enjoy music! Though unable to talk, she enjoyed visits by The Deerfield Gables staff, fellow residents, and family.

“Eat a Rock, Dana” were the closing words of a very touching letter of encouragement that Dana received while in Denver’s St. Anthony’s Hospital recovering from the injuries sustained in the accident. It was from UW-Madison’s Band Director, Mile Leckrone. “Eat a Rock”, you ask? “If you are tough enough to be in the Wisconsin Marching Band, you are tough enough to eat rocks”. Dana was an amazing survivor – and proved many times that she was tough enough to eat rocks. She will be profoundly missed by all of those who loved her.

A Celebration of Dana’s Life was held on Saturday, September 10, 2022 at 1 pm at Bakken-Young Funeral & Cremation Services 728 S Knowles Avenue New Richmond, WI and streamed live through the link just below this obituary.  Visitation was alson on Saturday, September 10, 2022 from 11 am – 1 pm at the funeral home. Please wear Badger red in remembrance of Dana.  In lieu of flowers, memorials may be sent to The Deerfield Gables, Employee Educational Assistance Fund, https://www.preshomes.org/get-to-know-us/foundation/make-a-gift-today, or to a charity of your choice.  Arrangements are with Bakken-Young Funeral & Cremation Services.