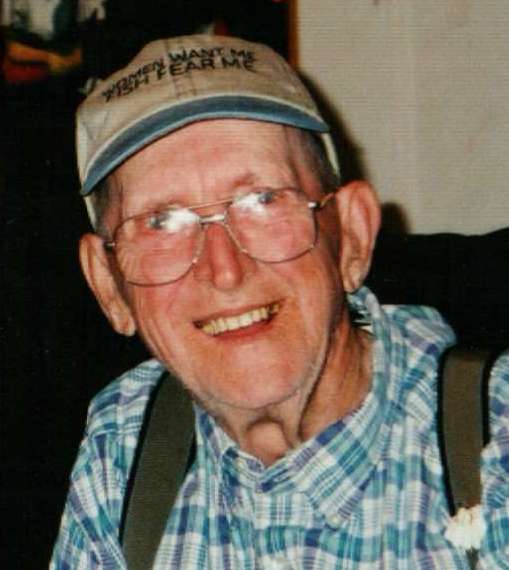 Charles H. Briggs, age 95 of the American Heritage Care Center in Hammond and formerly of New Richmond, WI, died on Monday, May 7, 2012 at St. Joseph’s Hospital in St. Paul, MN.  He was born the son of John and Emma (Niewoehner) Briggs on October 28, 1916 in Chickasaw County, Iowa.  On December 18, 1938 he married Marian Brandenburg. They had two daughters.  Charles later was married to Jessie Thompson in 1955 and Ethel Arnold in 1982.  Charles worked in the CCC camps during the depression.  He became a chef, and worked as one his entire career in Iowa and in Wisconsin at Lundy’s and The Laurel.  He loved to fish and hunt, play cards, and spend time with his family.  Until 2009, he was the oldest active member of the Indianhead Bassers Fishing Club.  He is preceded in death by his parents; 5 siblings; 3 wives; 3 sons-in-law; grandson, Mitchell Spencer; and many other loved ones.  Charles is survived by his daughters, Bernice Ahl and Bernadine (Don) Greenfield; grandchildren, Marcy Hanson, Jeff (Rachel) Vogt, and David Greenfield; great-grandchildren, Riley Hanson, Kyle Hanson, and James Dail Vogt; 7 step-children; and many step-grand and step great-grandchildren; special friends, Lenny Larson and family.  A memorial service was held on Friday, May 11, 2012 at 1 pm at the R & D Banquet Facility (corner of Highway 65 and County Road G), New Richmond.  Visitation was also Friday from 12:00-1:00 pm before the service.  In lieu of flowers, memorials may be directed to the donor’s choice.  Arrangements are with Bakken-Young Funeral & Cremation Services Beebe Chapel of New Richmond.