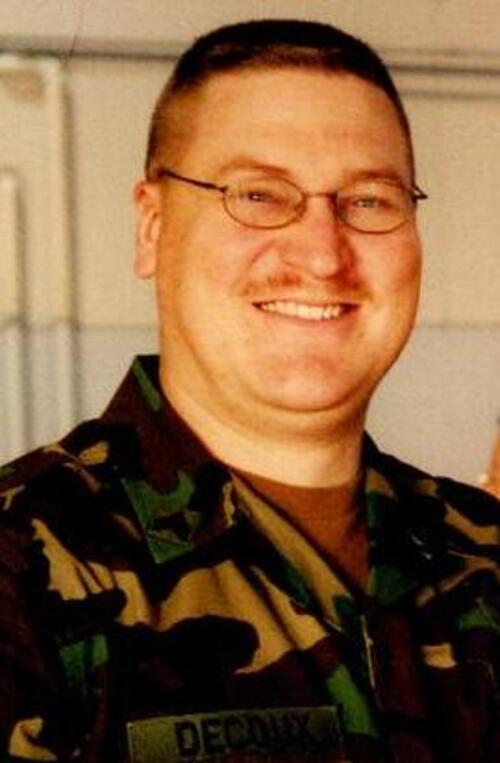 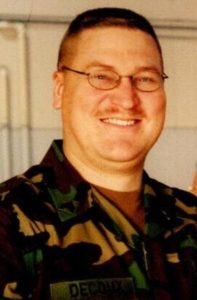 Brian Patrick DeCoux, age 48 of Oakdale, MN died on Wednesday, November 10, 2021, at his home. Brian was born the son of Ronald and Sandra (Bussiere) DeCoux on July 8, 1973, in St. Paul, MN.  He grew up in New Brighton, MN, graduating from Irondale High School.  He joined the United States Army in 1991.  During his 12-year career in the Army, Brian worked as a diesel mechanic.  He spent a year stationed in South Korea.  He was honorably discharged in 2000.  Brian served in the National Guard from 2002-2005.  He completed his training and worked as a Blackhawk Helicopter mechanic.  Brian recently was employed at the White Bear Lake Sam’s Club and Ziggy’s on Main in Stillwater.  He enjoyed sports and riding motorcycle.  Brian liked to collect things from baseball cards to Nascar miniatures.  He attended many Wounded Warrior Project events.  Brian was a big Twins fan and loved his dogs, Jewel, Pepper and Repo. He was kind and generous and enjoyed meeting people.  Brian is survived by his daughter, Brittney (Jameson) Axton of Justin, TX; parents, Ron and Sandy DeCoux of River Falls, WI; brothers, Andy (Thomas Boucquey) DeCoux of France, Chad (Michele) DeCoux of New Brighton, MN, and David DeCoux of Minneapolis, MN; nephews, Cameron and Griffin DeCoux of New Brighton, MN; and many other relatives and friends.   Memorial Mass of Christian Burial was held on Tuesday, November 16, 2021, at 11 am at St. Bridget Church 211 E Division Street River Falls, WI and streamed live through the link just below this obituary. Memorial visitation was held on Monday, November 15, 2021, from 5-8 pm at Bakken-Young Funeral & Cremation Services 805 E Division Street River Falls, WI and on Tuesday from 10-11 am at the church. A luncheon followed the funeral at the Fletcher-Pechacek American Legion 701 N Main Street River Falls, WI. Interment will be in Ft. Snelling National Cemetery on Thursday, January 13, 2022 at 1:30 pm. In lieu of flowers, memorials may be directed to: The Wounded Warrior Project. Arrangements are with Bakken-Young Funeral & Cremation Services.