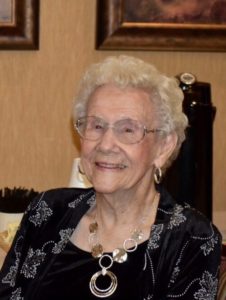 Anne A. (Mullen) Ochs, age 98, on February 3, 2021. She was a thirteen-year resident of The Deerfield in New Richmond, WI, formerly of Roseville, MN. Anne Mullen was born to Norwegian immigrants Olai & Caroline Mullen on October 26, 1922 in Bloomer, WI. During the depression, her mother was left to raise her and her siblings, ages 2-14, after their father passed away having struggled for 2 years with cancer. Unable to save the farm in Bloomer, her mother moved on and purchased a farm near Star Prairie, WI. After finishing grade school at Squaw Lake School, Anne attended and graduated from New Richmond High School in 1940. From there she moved to St. Paul and worked at Montgomery Wards in the Accounts Payable Office for 5 years. Anne met her husband, Worth, while dancing at the Prom Ballroom in St. Paul. They were married at Nativity Catholic Church in St. Paul in 1947. To this union they were blessed with 4 children: Tom, Nan, Jim and Suz. Their lives were filled with adventure having lived in Roseville, MN, Mesa, AZ, Milwaukee, WI, and completing the circle by returning to the Twin Cities in 1967. Roseville became their permanent home where they lived for many years. They called Arizona their winter home for several years during retirement until Worth’s death in 1997. Anne was preceded in death by her husband of 51 years, Worth; granddaughter, Carly Ochs; brothers, Sigward Mullen and Arthur Mullen; sisters, Oveila Lindsey, Eleanor Johnson and Olene Burkinshaw; nieces, Joy Giese and Beth Ulrich; nephew, Dick Mullen. Anne is survived by her 4 children, Tom (Marcia), Nan (Steve Duchene), Jim (Jeanene), Suz (Bob LeBarron); grandchildren, Nicole (Bryant) Miner, Dan (Susan) Lindstrom, Joel (Magen) Lindstrom, Sara Ochs (Adam Whisner), Brian (Alicia) Ochs, Jon (Jenny) Ochs, Dan (Amy Ochs), Andy (Dawn) LeBarron, Katie (Travis) Axel; great-grandchildren, Parker & Caymen Gebheim; Eleanor & Spencer Lindstrom; Willy Lindstrom; Joshua, Noah & Brielle Ochs; Kaylen, Lily & Brennan Ochs; Luetta, Finn, Carolyn & Ayla Ochs; Tyler Axel; Avery, Chloe & Bodhi LeBarron; and many nieces and nephews. Anne was a loyal daughter, sister, mother, wife, employee, volunteer, and a beloved aunt of many nieces and nephews. She loved to have fun and be silly, she loved her family deeply, and she loved her home at The Deerfield. She always tried to maintain a positive attitude, and she knew her blessings were many. She loved giving “free advice,” but was never pushy. A quote she clipped some time ago sums it up: “Be yourself – everyone else is taken.” Oscar Wilde. A memorial service will be held on Thursday, June 10th, 2021 with time TBD. Interment will be in Fort Snelling National Cemetery. Arrangements are with Bakken-Young Funeral & Cremation Services.