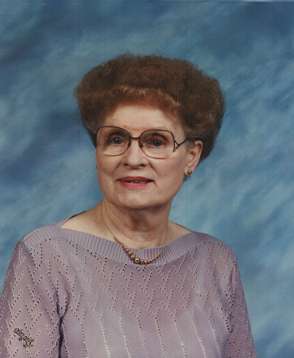 Amy Henrietta Nelson age 93 of River Falls died Sunday, October 9, 2011 at the River Falls Area Hospital.  Amy was born to Gottfried and Antoinette (Strand) Gustafson on a farm near Wolford, North Dakota on October 31, 1917, the third of five children.  She graduated from Wolford High School in 1936 and moved to Minneapolis a year later.  She worked her way through nursing school and graduated from the Abbott Hospital School of Nursing in 1940.  During WWII Amy nursed in San Francisco and Denver.  In 1947 she attended electrolysis school in New York and opened the first electrolysis practice in Minneapolis the same year.  On August 6, 1949 Amy married Dale M. Nelson of River Falls, son of Russell H. and Selina Nelson.  Amy nursed in the community until 1954 when she accepted the position as college nurse for what was the Wisconsin State Teachers College at River Falls and concurrently worked as school nurse at the Ames Laboratory School.  From 1954 to 1989 Amy ran a part-time electrolysis practice in Eau Claire in the office of Dr. George McAfee.  Upon her retirement, Amy enjoyed gardening, travel, feeding wild birds and visiting with friends.  She was an active member of the American Legion Auxiliary, PT Boats Inc., and 40 ET 8.  She was preceded in death by her parents, Gottfried and Antoinette Gustafson; husband, Dale Nelson; brothers, Gordon, Leo and Oswald; and sister, Eleanor.  Amy is survived by her sons, Russell Nelson of River Falls and Bernie Nelson of North Hollywood, CA; and many nieces and nephews.  A Funeral Service was held on Friday, October 14, 2011 at 11 am at the Rush River Lutheran Church.  Visitation was Thursday, October 13, 2011 from 5-8 pm at the Bakken-Young Funeral Home in River Falls and on Friday from 10-11 am at the church.  Interment was in Greenwood Cemetery.  Pallbearers were Fred Benson, Lt Col. Brad Dostal US Army, Fr. Jerry Harris, Bob Leary, Tom Pechacek, Tony Pechacek, Bernie Petrosky, and Charles Zellie.  Arrangements were with Bakken-Young Funeral & Cremation Services of River Falls.