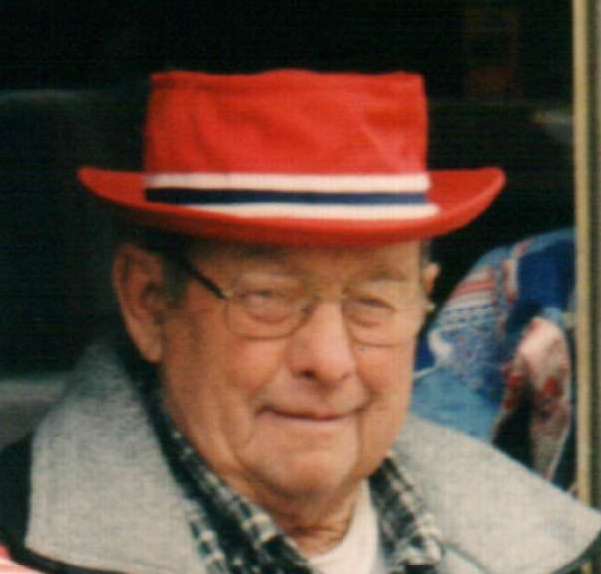 Earl E. Newton age 79 of Baldwin passed away Tuesday, August 21, 2012 surrounded by his family at United Hospital in St. Paul, MN.  He was born the son of Arnold and Gladys (Iverson) Newton on March 28, 1933 in Baldwin.  He graduated from Baldwin High School with the class of 1951.  Earl served his country in the U.S. Army from 1953-1955.  On June 16, 1956, he married Marlys Anderson in Baldwin.  Earl worked at Baldwin Produce and then was a livestock hauler for over 50 years.  He served on Gethsemane Lutheran Church board, Village of Baldwin board and was a volunteer on the Baldwin Fire Department.  Horses were Earl’s pride and joy.  He participated in many area parades with his horses.  He loved his “Woodside Lounge” relaxing at the picnic table with his family and friends having a cold one.  Earl was a huge Green Bay Packer fan and enjoyed cheering for the Wisconsin Badgers.  He will always be remembered for his “little red hat.”  Earl will be missed by his wife of 56 years, Marlys; sons, Kevin (Peggy), Terry (Lori); grandchildren, Nicholas, Brodie, McKenna, Jaden and Ty; sister, Delores (Don) Lind; brothers, John (Judy) and Duane Newton; sisters-in-law, Inez Newton, Mildred Anderson, June (Lewis) Geurkink; brother-in-law, Vernon Anderson; and many nieces, nephews, relatives and friends.  He was preceded in death by his parents, Arnold and Gladys; brother, Verlyn Newton; sister-in-law, Marion Anderson and brother-in-law, Galen Anderson.  A funeral service was held Saturday, August 25, 2012 at 11:00 am at Gethsemane Lutheran Church in Baldwin.  Visitation was Friday, August 24, 2012 from 4:00-8:00 pm at Bakken-Young Funeral Home in Baldwin and also Saturday from 10:00-11:00 am at the church.  Private interment will be held at a later date at the Baldwin Cemetery.  Nicholas Newton, Brodie Newton, McKenna Newton, Jaden Newton, Ty Newton and Adam Newton will be pallbearers.  Honorary pallbearers will be Dave Benck, Bob Link and Matt Link.  Arrangements were with Bakken-Young Funeral & Cremation Services of Baldwin.